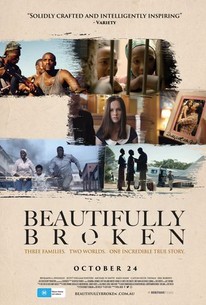 A refugee's escape, a prisoner's promise, and a daughter's painful secret all converge, causing their lives to become intertwined in ways they could have never imagined. As three fathers fight to save their families, they are led on an unlikely journey across the globe, where they learn the healing power of forgiveness and reconciliation.

Toby McKeehan
as Himself

An intelligently inspiring faith-based drama that links the fates of families in Rwanda and Nashville.

This is a faith based film based on true events. It delivers its message even if the performances are not all that strong.

Beautifully Broken is excessively heavy-handed and melodramatic. Every single scene is designed to be as weighty as possible.

This is not a big-budget Hollywood production. But it has the spirit and ambition to take on such a challenge, and the results, while not perfect, are impressive.

A faith-based drama that flatly and clumsily marries an American story to two African ones, and loses its heart every time it leaves Rwanda for Nashville.

Written by a staggering six credited writers, the faith-based movie Beautifully Broken is a well-meaning dramatic exercise that hopefully opens some hearts and minds to the refugee experience. Its message, for the most part, is worthy and empathetic. Reportedly based on a true story, we follow three families: 1) a Rwandan family that escapes the 1994 genocide, is trapped in the bureaucracy of the refugee system, and whose husband tries to make a new life in Tennessee for his family, 2) A Rwandan man who helped the previous family and has been imprisoned ever since, denied watching his own daughter grow into a teenager, 3) a wealthy Tennessee family struggles to cope with their rebellious teenage daughter, ignorant to the rape that changed her life. Can you guess which of these three storylines just isn't as interesting as the others and yet is the one we inexplicably get the most time with? If you guessed "rich white people," collect your prize. Beautifully Broken feels like an entire season of soap operas crammed into 108 minutes. The drama is so pitched but also strangely abbreviated, quick to resolution a few scenes later. It reminded me of those "previously on" clip packages before TV episodes. The characters are lacking recognizable dimension. They feel entirely too much like parts, meant to be happy, sad, and grateful, but rarely human. It makes for a dramatic feature that feels very inauthentic even when dealing with heavy issues like genocide, imprisonment, and sexual violence. Weirdly, the movie cannot even bring itself to utter the word "rape." The film also feels written by people with a very selective sense of teenagers; some of the signs that the teen is on a wayward path that alarms mom and dad include her listening to rock music, locking her room for privacy, and, worst of all, not having an interest in horseback riding any longer. There's a laughable subplot involving a bad boyfriend that seems like the most preposterous court case I've ever seen on film. Beautifully Broken examines the healing power of forgiveness and connection in a way that asks for compassion and understanding the immigrant experience. It even closes with a plea to sponsor a refugee to the U.S. Rarely do movies peak with their end credits. It just so happens that Beautifully Broken, a well-meaning but tedious tale, is that movie. Nate's Grade: C