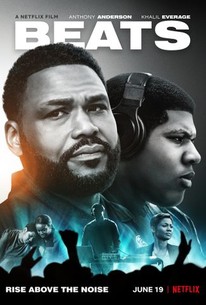 Critics Consensus: Beats is an entertaining - if all too familiar - coming-of-age story that is elevated by Anthony Anderson's excellent performance.

Critic Consensus: Beats is an entertaining - if all too familiar - coming-of-age story that is elevated by Anthony Anderson's excellent performance.

In this coming-of-age drama, a reclusive teenage musical prodigy (Khalil Everage) forms an unlikely friendship with a down-on-his-luck high school security guard (Anthony Anderson). United by their mutual love of hip hop, they try to free each other from the demons of their past and break into the city's music scene. Directed by Chris Robinson (ATL, "The New Edition Story"), BEATS features Everage in his feature film debut and co-stars Uzo Aduba and Emayatzy Corinealdi. BEATS is the ultimate ode to Chicago's South Side, and its long history of creating music that forms the city's beating heart.

There's little said here about violence or the arts that you can't find in an after-school special, and the music isn't half as ingenious or impactful as the plot demands.

Beats is a Netflix film that should be a part of any conversation about gun violence in America.

Like stumbling onto a new album and just being able to go along for the ride without ever needing to reach for the skip track button.

It plays a familiar tune that is agreeable, and won't challenge you too much.

Beats is a classic case of extraordinary acting saving a movie from its script issues and boilerplate story beats.

Beats is an entertaining watch that is most effective in sharing its message about how poisonous fear can be - but it's also scattered in the execution of its vision.

Beats is entertaining enough, but like many Netflix offerings can feel inconsequential.

There are no featured reviews for Beats at this time.