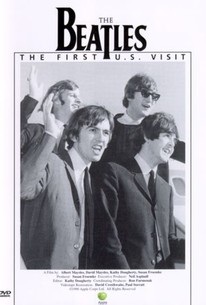 In February of 1964, Beatlemania began to spread to American shores with the first U.S. visit of John, Paul, George and Ringo to play a short American tour and make two appearances on The Ed Sullivan Show. Noted documentary filmmakers David and Albert Maysles had the presence of mind to realize there was a story here, and they followed The Beatles with their cameras throughout their first American adventure, capturing the magic of their music and the glorious madness that was Beatlemania.

Murray the K
View All

The let-it-be flip side of A Hard Day's Night.

There are no featured audience reviews yet. Click the link below to see what others say about Beatles: The First U.S. Visit!