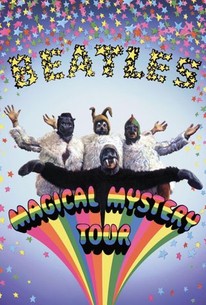 After the success of the Sgt. Peppers LP, the Beatles decided to hire a psychedelic bus, take a trip into the English countryside, and film the results, no matter how bizarre or boring. With a motley cast of characters, the group basically tramps about the landscape with occasional music cues to give the film a bit of flow. Though Magical Mystery Tour is an interesting document of the Beatles psychedelic period, its cinematic function is negligible. ~ John Bush, Rovi

Maggie Wright
as The Lovely Starlet

Total Recall: Across the Universe And The Beatles On Film

My feelings on finding myself almost alone in praising the Beatles television film Magical Mystery Tour are amazement, and the sad conviction that as a mass the public is more stupid and ignorant than it is as individuals, and does not like to be told so.

As 60 minutes of self-indulgent psychedelics, it's nearly impossible to watch.

A must-see for Beatles buffs and anyone interested in how the '60s looked as they were happening (rather than in slick, retrospective recreations); others might want to take a pass.

Here's a clue for you all...the Walrus was Paul!

I would recommend a new generation of Beatle fans to put MMT: The Movie near the bottom of their to-do list, but never to scratch it off entirely. It remains a necessary curiosity item and slightly ahead of its time.

Very campy at times. It's basically an early concept for MTV. They do videos for their songs from the album of the same name and try to string them together with a thin plot in between.

The worst Beatles movie, of the Beatles movies which star the Beatles. The story is really much too silly, and stupid. Plus, the Beatles don't play a big enough role, which is weird. It has some funny moments, but overall it's just so-so.

okay...maybe the only proof you'll ever need that "this is yer brain on drugs" and "just say no"...okay, i admit it. i'll still sing-along with every song in this every time i see it, so eat that slowly (on an empty stomach and wait a half an hour...).