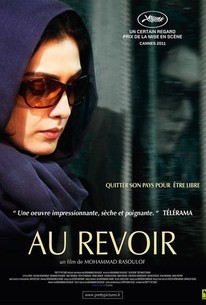 A woman faces an uphill climb as she struggles to free herself from a repressive regime in this drama from Iranian filmmaker Mohammad Rasoulof. Noora (Leyla Zareh) is an attorney who is no longer allowed to practice due to an edict from the state, and whose husband has already fled the country after learning that he and his fellow reporters were soon to be the subject of severe government reprisals. Noora can no longer tolerate life in her homeland, and is determined to leave; however, the authorities are equally determined to make it difficult for people like herself to emigrate, and she spends her days dealing with endless rounds of paperwork and bureaucracy while devoting her nights to simple labor in order to support herself. As Noora become more convinced she'll not be allowed to leave Iran through official channels, she makes discreet inquiries into obtaining a visa on the black market. Noora learns expectant mothers face less questioning when trying to leave the country, and with this in mind she gets pregnant, but her plans become more complicated when she learns her unborn child will suffer from a severe medical condition. Be Omid E Didar (aka Goodbye) was produced while writer and director Mohammad Rasoulof was awaiting final word on his sentence after he and a number of other Iranian filmmakers were convicted of "assembly, collusion, and propagandizing against the regime." ~ Mark Deming, Rovi

There is an undercurrent of rage in the character and the film. That it never bubbles to the surface only makes the portrayal of tyranny and repression in Iran even more chilling.

An air of resignation hangs prominently over Goodbye, a sense of despair so oppressive that it seems to invade the world its main character inhabits.

Absolutely essential viewing, not just for its merits as a paranoid thriller but out of respect to the man who gave up his freedom to tell this story.

A portrait of life in Iran through the eyes of an oppressed woman lawyer who yearns to escape to freedom.

There are no featured audience reviews yet. Click the link below to see what others say about Bé omid é didar (Goodbye)!