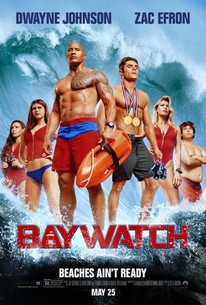 BAYWATCH follows devoted lifeguard Mitch Buchannon (Johnson) as he butts heads with a brash new recruit (Efron). Together, they uncover a local criminal plot that threatens the future of the Bay.

Hannibal Buress
as Dave
View All

The biggest disappointment of this feature is that it's not even so bad it's good.

Suffice it to say, too, that there's a lot of delight to be had in the frothy union of the Bay and the Watch, much of it coming from Johnson, who carries the whole of this movie on his epically chiseled lats.

It's a long haul and despite his rescue efforts, the one-joke script fails to make it.

Teeters between absurdity and earnestness.

[Baywatch] won't make anyone think about anything, except maybe about where to plan their next vacation where they, too, can run in slo-mo on the sand. But, with everything else going on in the world these days, that may not be such a bad thing.

From scene to scene, it's never quite clear whether this Baywatch is paying tribute to its model or sending it up.

A really fantastic 40 minutes of comedy sandwiching 80 minutes of ok comedy for a holiday weekend.

Although entertaining enough and with enough eye candy for both sexes to pass some time, you'll soon forget about Baywatch faster than Captain Jack Sparrow's always sinking ships.

The new Baywatch takes a more adult approach, but its execution makes the beach feel like a boy's locker room complete with towel snapping, butt slapping, and crotch fondling.

Amid all the glistening skin, requisite chase scenes, low-brow gross-out gags and, at one point, literal fireworks, Baywatch is content to simply tread water.

Achieves a level of incompetence rarely seen in modern cinema.

Baywatch might earn its r-rating but doesn't do anything fun with it aside from the same boring crude jokes.

This is so bad I've been checking my phone for the last 20 minutes, I can barely make it through. Just a horrible, charm less collection of dick jokes, stereotypes and lousy music. Without The Rock I would have quit an hour ago.

Right, so I know precisely feck all about Baywatch the TV show apart from the fact it starred the legendary David Hasselhoff and Pamela Anderson. Baywatch was always one of those popular things that existed in the background of my younger years, but I simply wasn't interested in it (much like [i]Power Rangers[/i], [i]Neighbours[/i] or [i]Home and Away[/i] for example). It seemed that most young lads would watch Baywatch simply to see Pamela Anderson and co running around in their tight red bathing suits. Being a fan of Ms. Anderson I understood the potential of this but it simply wasn't enough to get me to watch the show. It always came across to me as very lame and extremely vanilla softcore porn, like looking in a women's underwear catalog. This movie is basically all about a team of lifeguards that work together to bring down a nasty entrepreneur who is planning on buying up the whole beach area so she can sell her synthetic street drugs easily. Is that what tended to happen in the TV show each week? Also, I thought this series was set in California? This movie seems to be set in Florida, why is that? Anyway before all the action kicks, in true [i]Police Academy[/i] style, the lifeguards are recruiting so cue a lengthy montage of so called comedy and pretty people in swimwear. This also introduces us to the whole gang basically. Lifeguard leader, Lieutenant Mitch Buchannon who is generally an all round perfect human specimen but thinks he has the authority to do anything on and off his beach. Stephanie Holden (IIfenesh Hadera), second in command, cocky and Asian? And C.J. Parker (Kelly Rohrbach), hot blonde who isn't as hot as the original played by Anderson. That's it, that's the team, three people. The new recruits are Summer Quinn (Alexandra Daddario) who is the standard hot brunette. Ronnie (Jon Bass) the stereotypical fat nerdy guy who is somehow picked despite being clearly too fat. And young good looking hotshot Matt Brody (Zac Efron). So as you might expect there are egos flying all over the flippin' place in this movie, satire or not. The movie is pretty much The Rock vs Efron for the most part. Dwayne Johnson is doing his usual all round nice guy charm act interspersed with being really hard when he needs to be. There is also a strong family theme running though the movie that Mitch himself promotes at every turn with his team (ugh!!). Whilst Brody is the stereotypical dimwitted pretty boy that starts off all big-headed, gets taken down a peg or two and then proves himself. At the start Brody must complete this pointless obstacle course only to find out he must then complete Mitch's weightlifting obstacle course, which was equally pointless. I guess it was to show Brody up and prove he wasn't ready? Or it was just pointless, you decide. Admittedly the fast put-downs that Mitch throws at Brody are highly amusing and brutal. Whilst in conversation Mitch calls Brody 'High School Musical', 'One Direction', 'Bieber', 'Malibu Ken', 'Baby Gap' etc...At the same time Mitch also throws out some epic lines such as [i]'I'm oceanic motherfucker!'[/i]. Most of the reasonably funny stuff comes from either Johnson or Efron as they clash nipples. The rest of the cast are useless and merely there to either look pretty or attempt to be funny. Jon Bass as fat Ronnie is not funny, he is of no use in the movie and he does literally nothing. The opening visual gag of him getting his nuts stuck in a wooden deckchair was pitiful. The girls were...umm...very nice in their red swimsuits. Attempts were clearly made to give them brains and useful scenes but alas...The villain was also a female played by Priyanka Chopra, she was very beautiful, that is all. The main joke in this movie that obviously pokes fun at the TV show (presumably because I don't actually know), is the fact that these lifeguards actually have no real power. They are merely lifeguards that stop people from drowning and keeping the beach safe from...littering, sexual acts, crime I guess...whatever. The whole point is they aren't cops, they can't go after drug dealers, they can't have car chases and they can't infiltrate anywhere. Mitch has a hard time understanding this with his heroic gung-ho attitude, plus he's also backed up by Stephanie and C.J. which doesn't help. Ironically its only dumbass Brody that seems to understand this. The main problem I had with this movie aside from the terrible dialog, horrendous acting, fucking dreadful CGI, fucking dreadful greenscreen, God-awful action sequences, immature facepalm comedy and completely unstructured plot, aside from all that. One single thing, is this supposed to be an actual serious action flick? I know that sounds incredible because you'd think this was an obvious spoof like many other movies of dated TV shows. But yes, I ask, is this supposed to be serious because at times I just couldn't tell! At points there are moments of stupidity for sure, as if the director forgot to put that kinda of material in. But for the most part this felt like a genuine action movie, like they actually took it relatively seriously. Hilarious really because its so unbelievably bad. So yeah, this movie is flippin' garbage. Chock full of obligatory rap music. Lots of little jabs using identity politics, again apparently obligatory now. And a cameo by David Hasselhoff that doesn't make any real sense. Hasselhoff appears to Rock-Mitch and begins to teach him in a spiritual kind of way. So he's supposed to be some kind of mentor? From where? Mentor of what? Then we also get a mute cameo from Pamela Anderson; just walks on screen in slow motion and done. A predictable, throwaway, waste of everyone's time and money.

It embraces camp in a ridiculous way, with obnoxious characters, shitty actors (even though Dwayne Johnson is charismatic), awful CGI (a clear indicator of a lazy director) and nothing of the kitsch charm that made the TV show so amusing and successful in the first place.

Baywatch's opening sequence sets the tone of the shows ridiculous premise immediately as it quickly recognizes itself as a parody of what was always a silly idea. Filled with referential self deprecating humor the movie excels most when being excessive. Yet for some odd reason Baywatch continually attempts to create real heartfelt moments that simply do not belong, they're both awkward and unwelcoming. It also feels like Dwayne and Zac steal the show entirely as the supporting cast gets subsidized to having little to no character and are simply along for the ride. In the end it's exactly the type of nonsensical popcorn comedy that it's intended to be but it could've been a lot more entertaining if more creative, over the top scenarios were played out and supporting roles got a chance to shine.