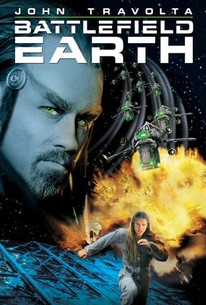 When an alien race called the Psyclos turns the Earth into a mining colony, it's up to rebel hero, Johnny Goodboy, to lead a revolt and save the planet from the giant alien species.

Richard Tyson
as Robert the Fox

Jim Meskimen
as Blythe
View All

Hear Us Out: Battlefield Earth Is Terrible, but It’s More Fun Than You Think
New on Netflix in September 2019: New Movies, TV Shows, Netflix Original Series
50 Worst Summer Movies of All Time

Logic is in short supply. Burned-out cities have electricity, for example. My favorite: A hangar full of jets, buried under 1,000 years of dust, not only fire up instantly but still have full tanks of gas.

Not awful, but pretty bad. A third-string Planet of the Apes meets Star Trek, Battlefield Earth is a largely uninspiring sci-fi adventure with a Swiss-cheese plot.

With this journey into the heart of rubbish, this full-throttle adventure into the hyper-space of drivel, Travolta not only incinerates what is left of his own reputation, but takes someone else down with him.

Not so much watched as lived through, Battlefield Earth is bad enough to make audiences ashamed to be part of the same species as the people who made it.

The summer movie season has barely begun and already it has its first 10-ton turkey.

Nothing so entertaining, albeit in none of the right ways, should scrape WOAT status. It's not even one of the 10 worst films from 2000, a distressingly dunderheaded year for movies in general after one of the best ever.

A disaster of a screenplay meeting dreadfully overdone and under-thought filmmaking.

The plot is like a talentless adolescent's attempt to rewrite Spartacus as science fiction.

The plot is jumbled and poorly edited, the dialogue laughable, and special effects seldom appear so common. A performance by John Travolta in which he abandons everything that ever made him cool is the rotten cherry on top.

If you are looking for something to hate and despise, get thee to this movie.

Worse than its ridiculous overuse of Dutch angles, color filters and cheap special effects is how overwhelmingly illogical this dreadful piece of junk is, with such a colossal amount of plot holes and incoherences - however curious and amusing it is to observe the many ways it finds to get worse.

Now this film wanted to be epic, it really tried, Travolta put millions of his own fortune into it and pushed people into helping him create it. These type of catastrophic alien invasion films were all the rage around this time after the success of 'Independence Day'. The films title alone sounds epic, a thundering statement...BATTLEFIELD EARTH!, it sounds like the ultimate sci-fi action film, so what's wrong with it?. First and foremost it looks like, and for all intense and purposes, is an extended 'Star Trek' episode. The plot is very dull and plays out like a dull episode of Star Trek, one involving lots of dialog about mining for minerals (gold, for what reason? I dunno), slave trading and general alien politics. The mistake made with the alien race (with the rather stupid name of 'Psychlos', is that the best Hubbard could come up with??) in this film is that they are dissected too much. We hear about all sorts of trivial background stuff that isn't required, in the end they just seem like large humans, there is no mystery. On top of the really overly laboured plot is the simple fact that these aliens look crap. Putting aside the obvious 'Klingon' like appearance, they look like huge platform wearing transvestites with dreadlock-like hair in campy goth space suits. As if they belong in some fetish club or one of those freaky bizarre goth circus's. Then there's the simple question of why Travolta's face isn't the same as the rest of the alien race? why do all of them have devil/vampire-like faces but Travolta's is normal?. Is this because Travolta didn't wanna be hidden behind makeup?. Who's decision was it to let Travolta have/keep his little goatee? that kinda detracts from the whole alien design don't you think, a humanoid goatee. And who are these really old looking alien politicians with the flabby necks? is that what 'Psychlos' look like with age? why don't they look like the other 'Psychlos' facially?. Other minor issues spring to mind also such as the fact these guys don't feel pain, Travolta's arm gets blown off yet it doesn't really faze him. Whitaker seems to be the only black alien in the entire race. Then there's the amusing observation that most of the cast clearly can't walk too well in the stilts they are on, no running by these aliens hehe. Then we have the human element, or what's left of them. OK so humans are almost extinct and the 'Psychlos' have been ruling them for 1000 years apparently. So why has humankind completely forgotten everything about their past? the ability to use their brains, know what basic objects like glass or weapons are, names of places etc...they have forgotten everything which makes no sense. Mankind has been enslaved by aliens but why have they gone backwards to primitive cavemen? they don't know what a city is or what stars in the sky are, they worships Gods like ancient humans once did and they all scream and yelp like monkeys. But they still wear trousers. The plot totally loses it once the rebellion begins, the last humans led by Pepper conveniently find apparent secret military bases still stocked to the gills with weapons, Harrier jets and power it seems. Little bit of training and many of them are now proficient in guns and even better...can fly Harrier Jump jets no probs!! just like that. So much so that they are able to engage alien ships in a fancy ass dogfight. There really are so many plot holes and question marks I can't possibly mention them all or remember them all!. I do recall the effects being somewhat bigged up at the time, they were suppose to be pretty neat for the day. I guess they aren't too bad to be honest, some shots look nice, mainly ruined cityscape's, the alien ships are a reasonable design as is some of the ship flight sequences. Sets are pretty bland and uninspired, just faceless metallic facilities whilst the whole film has this quite ugly blue/grey/green tint/hue to it which is unusual. So for a film called 'battlefield earth' there actually isn't that much in the realms of mega earthbound conflicts going on, its all based in one location. On a certain silly level the film can be enjoyable with its action sequences, it totally jumps on the 'Independence Day' bandwagon that's for sure, but it can still be minor fun. Had this been a few half hour episodes of a TV sci-fi series then it could be looked on more favourably. I mean the film really isn't much better than a TV show, but I must admit to liking Travolta's wickedly evil campy performance. That and the 'Psychlos' females that we get a glimpse of, a kind of fetish wearing gothic 'Cenobite' with very very long tongues, film highlight for me.

From what I've heard befire I watched this movie, it's one of the worst films ever made, quite possibly even the absolute worst. I knew nothing about the movie so I rented it and here's what I have to say: ARE YOU FUCKING SERIOUS?! How was this movie allowed to be made? Who thought this would work? What parts of the movie make sense? The plot is simple and stupid; it's in the year 3000 and a weird race or something called the "Psyclos" are ruling the Earth and this group of humans has to stop them. The leader of the psyclos is named Terl and he's played by John Travolta. Why would you cast him? His only good role was in Pulp Fiction. His performance in this shows why he'll never be taken seriously as an actor ever again. His line reading is hammy and he's the definition of over-the-top. Another actor is Barry Pepper and he's mostly known for his role as the sniper in Saving Private Ryan. If only he could've brought that role on the set of Battlefield Earth and sniped the director. A really odd thing about the movie are the weird camera angles. All the angles are tilted so that whatever is on screen is close to being exactly diagonal. It's mind-numbing and it gets old really quick. The special effects are awful. They made me feel like I was watching a campy, public domain action movie.The editing also doesn't help for the "action" scenes. It's just all over the place. One example is when (Spoiler alert, though I'm pretty sure you've lost you're ability to give a shit with this movie.) Terl gets his arm blown off. The guy blasts it, his arm is on screen for barely a second and that's it. I didn't even know what had happened until I saw Terl with a missing arm in the end scene. Oh and the "clever" irony of the last scene involving a bunch of gold is enough to make anyone groan or make a sarcastic remark. (You don't say?!) Avoid this movie by all means. It's an hour and forty-five minutes that will just drag on and on. The worst part is you probably won't be able to get it back.

It's difficult to describe how bad this movie is. It's one of those movies that's so bad it deserves to be classified as a comedy.