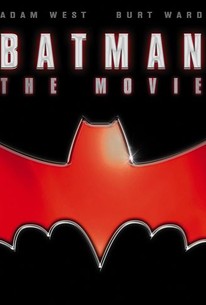 Critics Consensus: Batman: The Movie elevates camp to an art form -- and has a blast doing it, every gloriously tongue-in-cheek inch of the way.

Critic Consensus: Batman: The Movie elevates camp to an art form -- and has a blast doing it, every gloriously tongue-in-cheek inch of the way.

Tongue-in-cheek humor prevails in Batman, a witty homage to the Dynamic Duo's exaggerated exploits. The Caped Crusaders (Adam West and Burt Ward) are called in as a last resort when the criminal masterminds of the millennium team up to conquer Gotham City by turning the U.N. Security Council into dehydrated dust; among the villains are the Joker (Cesar Romero), Catwoman (Lee Meriwether), the Riddler (Frank Gorshin), and the Penguin (Burgess Meredith). The entire cast is excellent, particularly West and Ward, who distinguish themselves among a standout list with hilariously straight-faced performances. The film includes some truly memorable scenes, highlighted by a particularly tenacious shark with a vertical leap that would put Spud Webb to shame and a bomb on the waterfront with no place to explode (nuns, infants and lovebirds beware!). ~ Jeremy Beday, Rovi

Burgess Meredith
as The Penguin, Pingwin

Cesar Romero
as D?oker, The Joker

George Cisar
as Rumpot in Window

News & Interviews for Batman: The Movie

View All Batman: The Movie News

Critic Reviews for Batman: The Movie

Batman is packed with action, clever sight gags, interesting complications and goes all out on bat with batmania: batplane, batboat, batcycle, etc. etc.

I'd choose Adam West's Batmobile over Michael Keaton's any day.

Not as good as Batman TV show, but still has endearing moments.

For Bat enthusiasts, this is a gold mine, for everyone else? A passable cult film.

As a solo viewing experience, this is feeble indeed, but invite some friends over for a BYOB bash and its entertainment value rises substantially.

Even if it is a compromised version of the TV show, it's far, far better than nothing.

Fluffy, good-natured, endlessly quotable fun, just like you remember it.

Shot in the same campy style that characterized the TV show, all the cast members look like they are having a great time chewing up the scenery.

Unlike other attempts at bringing these characters to life... the TV cast really captures the inherent insanity of the roles

Campy, colorful fun with the Caped Crusader plus several of his TV villains.

Audience Reviews for Batman: The Movie

The silliness is almost unbearable. Almost.

A nice piece of camp cinema that tends to be pushed under the rug by fans of the Christopher Nolan Batman trilogy. Deliberately cheesy and filled with hilarious dialogue. I mean, where else can you find a movie with lines like, "Some days you just can't get rid of a bomb.". Plus the endearing chemistry between the dynamic duo of Adam West and Burt Ward keep things going even through some of the slow sections of the film. Not nearly as good as the later live-action entries but worth a viewing nonetheless.

[img]http://images.rottentomatoes.com/images/user/icons/icon14.gif[/img] Almost entirely forgotten and overlooked by Christopher Nolan's trilogy of Batman films, "Batman: The Movie" is much lighter, comedic, friendlier and weirder than the more recent films. I have to admit it's not as good as the later Batman films but as frequently stated, the truth is it's campy fun and nothing more.