Batman - Return to the Batcave2005 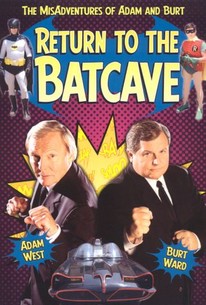 Batman - Return to the Batcave Photos

The stars of a classic television series look back on old adventures while facing new intrigue in this made-for-TV comedy drama. Adam West and Burt Ward, best remembered for playing Batman and Robin on the hit show Batman in the 1960s, learn that someone intends to steal the original Batmobile from a charity event where they've agreed to appear. West and Ward set out to capture the ne'er-do-wells before the crime can occur, and as they investigate likely suspects, they recall the heyday of the Batman series and the massive impact it had on their lives. While Adam West and Burt Ward play themselves in the present-day sequences of Return to the Bat Cave, they're respectively played by Jack Brewer and Jason Marsden in the 1960s flashbacks.

Critic Reviews for Batman - Return to the Batcave

There are no critic reviews yet for Batman - Return to the Batcave. Keep checking Rotten Tomatoes for updates!

Audience Reviews for Batman - Return to the Batcave

Holy predictable review opening Batman!...sorry, yep I know, no more. Way back in the vintage days of 2003 this TV movie came out on CBS in America, so basically no one outside of America knew of its existence. What's it about you say? well its simply a comical retrospective or quickfire trip down memory lane for Adam West and Burt Ward over their three season career as Batman and Robin. Its made around a silly little plot involving someone stealing the Batmobile at a convention, so the ancient dynamic duo set out to find the culprit. The bookend plot is frankly meaningless really, I've no idea why they even went down that route when a simple bio approach would have been much better. The minor problem being that the actual sequences of West and Ward in their superhero days are flashbacks dotted throughout the plot. This means they are all too brief which is a shame because they are the best bits by far and you wanna see more. The general approach of the entire flick is a harmless ridicule of the original show and is in no way meant to be anything but a good laugh. So on that note I can't complain, it is a silly ride, there are some nice moments that homage the old show, mainly a lovely punch up between the aging pair and some goons...the camera of course being suitably tilted at an angle. There are a few cameos from stars of the show naturally, Frank Gorshin and Julie Newmar being part of the daft plot, Meriwether makes an appearance and is still pretty darn hot (as is Newmar), whilst other old stars are played by actors and I must say they are very good, Tony Tanner as Meredith/the Penguin is excellent. During the wafer thin and pointless Batmobile mystery plot you get nice cameos, homages and general cartoonish tomfoolery which is of course all in the same camp slapstick vein as the classic show. At the same time the retro flashbacks show highlights from West and Ward's lives in the famous outfits but in a light-hearted family orientated manner. These little snippets mainly focus on things we've heard about in the Batmania documentary like Ward and his audition, meeting West for the first time, Ward getting injured on set often, Waggoner's audition, the duo squabbling, Ward's troubled married life, the intro of Yvonne Craig as Batgirl, some of the big star cameos etc...It does seem to follow Ward more as the underdog, where as West (as in real life) was the more experienced older ladies man who could do no wrong. The two actors playing the young versions of West and Ward are really good and they look like their real life counterparts, plus the stories from behind the scenes during the time of the old show are really interesting. I really liked how the retro flashbacks were done, think Tim Burton's 'Ed Wood' but not quite as cheeky. So while is it cool to see West and Ward firing dialog at each other again (don't forget about the awesome OAP bar room brawl), overall I would have liked to see more of the well created flashbacks.

Absolutely wonderful. Return to the Batcave brings West and Ward together again. Luckily, this is far from some egotistical, reliving the glory days trip. It's a heartfelt reconstruction of the making of the show, and a comedy caper about a stolen bat-mobile that perfectly captures the spirit of the original. West and Ward also don't pull any punches, allowing themselves to be shown in, often, less than glamorous lights. It's great to see some of these strange but true moments come to life, and how this show changed the lives of two relative unknowns. It is carried by it's charm, honesty, and refusal to conform to modern day biopics/docu-dramas.

Batman - Return to the Batcave Quotes