Batman: Mask of the Phantasm1993 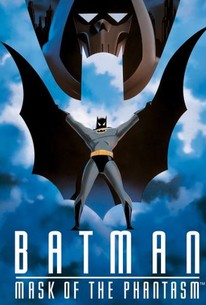 Critics Consensus: Stylish and admirably respectful of the source material, Batman: Mask of the Phantasm succeeds where many of the live-action Batman adaptations have failed.

Critics Consensus: Stylish and admirably respectful of the source material, Batman: Mask of the Phantasm succeeds where many of the live-action Batman adaptations have failed.

Critic Consensus: Stylish and admirably respectful of the source material, Batman: Mask of the Phantasm succeeds where many of the live-action Batman adaptations have failed.

Batman: Mask of the Phantasm Photos

This stylish animated adventure is based on the '90s animated television series, which in turn is based on the original comics and Tim Burton's live action "Batman" films. Unlike the campy 1960s version of Batman, this version is half-mad from the superhero's obsession with justice. It is only his unusual sense of ethics that keeps him from becoming a full-blown psychotic. The story describes the origins of Batman as it follows the Dark Knight's attempts to capture the elusive, deadly Phantasm who kills a crime lord and makes it look as if Batman did it, causing a media smear campaign against the Caped Crusader. At the same time, millionaire Bruce Wayne holds a party at his mansion. There he meets Councilman Arthur Reeves, the man behind the accusations. Reeves derides playboy Wayne for allowing his college sweetheart Andrea Beaumont to leave him. Suddenly Wayne flashes back to his pre-Batman days. He remembers how he met her while visiting his parents' graves to renew his vow that he would spend his life fighting crime to avenge their wrongful deaths. He has already devised an early version of his alter-ego Batman, but that is nearly forgotten when he falls in love with Andrea. The story then jumps from past to present and back as the mysterious Phantasm strikes again. Batman continues his investigation and discovers a disturbing link between Andrea, who suddenly shows up after many years absence, and the villain. Meanwhile, the Phantasm, feeling that Batman is too close to learning his/her identity hires the Joker to kill him. But the Joker has his own agenda and much action ensues before the mystery of the Phantasm identity is solved, Batman clears his name, and justice is served. This film was originally made to go straight to video, Warner's studio liked it enough to release it theatrically. Some of the violence may be inappropriate for very young children.

Mark Hamill
as The Joker

Batman and Robin
View All

News & Interviews for Batman: Mask of the Phantasm

Mark Hamill Talks His Most Iconic Voice Work: From the Joker and Fire Lord Ozai to Chucky
The 20 Best Superhero Movie Villains
Every Batman Movie Ranked Worst to Best by Tomatometer

View All Batman: Mask of the Phantasm News

Critic Reviews for Batman: Mask of the Phantasm

The mask of the phantasm is the mask that Bruce Wayne puts on every day, and if he falls into the abyss, he risks a life like Andrea's: completely alone.

The violence is too realistic (though not terribly graphic) to qualify as cartoony escapism, yet the movie lacks the sophistication, vision or satirical edge to lay claim to any higher purpose. It's merely dark for dark's sake.

While the script and pedigree of actors are commendable, the craft level is too close to the small-screen offering to get audiences into theaters.

Closer to radio drama than kiddie fare, Batman: Mask of the Phantasm is the strangest PG film of the year.

Phantasm succeeds as a gloomy but not claustrophobic assessment of the superhero world that does not lose any of its panache for its seriousness.

It's a Batman movie actually about Batman! Imagine that!

Fans of classical animation are hereby warned to steer clear of Batman: Mask of the Phantasm, for it will put them in instant vapor-lock and there aren't enough ambulances available this time of year.

Among the boldest and most ambitious stories ever attempted in its franchise, and it is as acute, and compelling, and satisfyingly Batmanny as any of the Batman features, if not moreso.

A spin-off of the semi-hit animated TV series, Batman: Mask of the Phantasm goes even further into the roots of the bat-dude's particular pathologies.

Quintessential Batman and a quality cartoon.

Audience Reviews for Batman: Mask of the Phantasm

Aside from Christopher Nolan's recent interpretations, this is the best Batman movie out there. A harrowing origin story for how Bruce Wayne became Batman combined with a noir-esque femme fetale romance and one hell of an unexpected plot twist, this is an excellent film. The animation has also aged gracefully.

As far as animated films are concerned, Batman: Mask Of The Phantasm is a film that has really stood out for me. I remember watching this one several times as a kid, and man did I enjoy it. As far as animated films are concerned, this is a classic film, and one of the best animated features that is NOT a Disney feature since 1981's Heavy Metal. Batman: Mask Of The Phantasm is a must see for Batman fans everywhere and is actually just as good as Tim Burton's Batman works. This film is lavishly drawn, dark and violent. The film breaks ground by being an animated film that isn't just for kids to enjoy. The film has a thrilling, riveting story that will appeal to the die hard Batman fan. This is simply put a solid action film that even though is animated is still worth seeing by skeptics that think that animated features are only for kids. This film has a darker tone what you're usually used to in a Batman film. This is a terrific film. The voice talents are incredible and the cast deliver great performances. Along with the great art and the awesome, talented cast, Batman: Mask Of The Phantasm is a superb Batman film that is a definite must see film. Don't be fooled because of the animation, this is one violent film with lots of action and thrills to will satisfy anyone looking for a good action film. A well crafted film that is simply a near flawless action film, and is one of the best of the earlier Batman films.

So far the best Batman movie, the only time they gave him an good love interest of a character, something the live action movies have never done right.

The Dark Knight fights to save Gotham city from its deadliest enemy. Good movie. It was entertaining and fun. Loved it! Batman, the costumed crime-fighter who prowls the night skies in Gotham City, soon finds there's another vigilante in town knocking off prominent mob figures. Despite the scythe-like blade for a hand, a mechanical voice and the cloud of smoke that follows the figure wherever it goes, the police and outraged officials mistake the homicidal crusader for Batman himself and demand that the city's longtime hero be brought to justice. Meanwhile, Andrea Beaumont returns to town. She is the lost love of Bruce Wayne, the billionaire playboy who is Batman's alter ego, and was an integral part of Wayne's decision ten years earlier to don the cape and cowl. Now, she is back in his life and is no less a disruption than the return of his old archenemy, The Joker, who has a stake in seeing the annihilation of this new vigilante, whoever it proves to be.

Batman: Mask of the Phantasm Quotes