Batman Beyond: Return of the Joker2000 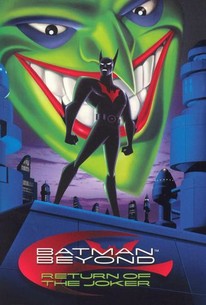 Critics Consensus: This feature length entry in the Batman Beyond mythos sends off the Mark Hamill-voiced Joker in thrilling fashion, hitting the same caped crusading peaks of the original series.

Critic Consensus: This feature length entry in the Batman Beyond mythos sends off the Mark Hamill-voiced Joker in thrilling fashion, hitting the same caped crusading peaks of the original series.

Batman Beyond: Return of the Joker Photos

The young protégé of one of the world's greatest superheroes has his first encounter with an old nemesis in this direct-to-video feature adapted from the popular animated series Batman Beyond. Terry McGinnis (Will Friedle) has taken over the crime-fighting responsibilities of Batman from aging Bruce Wayne (Kevin Conroy), but while Terry has learned a great deal from Wayne, he's never heard the startling truth about Batman's final encounter with his arch-enemy, The Joker (Mark Hamill). However, when The Joker returns to Gotham City as vicious as ever, Wayne decides that it's time that the new Batman learned all there is to know about the green-faced terror before he can bring the city to its knees -- especially after Bruce is attacked by his one-time rival. Batman Beyond: Return of the Joker also features the voice talents of Melissa Joan Hart and Angie Harmon. Upon its initial release, the movie sparked some controversy among Batman Beyond fans because of last-minute edits that toned down the violence level. However, it was eventually released on DVD in an uncut format.

Will Friedle
as Terry McGinnis/Batman

Mark Hamill
as The Joker/Jordan Price

Critic Reviews for Batman Beyond: Return of the Joker

The flashback alone is a classic Batman scene.

A fantastic extension of the Batman mythos and one that pays homage to the classic Dark Knight, while also extending the dignity and mature arc of "Batman Beyond."

The PG-13 rating...reflects the mortal intensity of this most chilling of animated Batman tales.

Surprising cartoon shocker that would have made a great live action Batman movie.

The whole story is brimming with suspense, action, and humor - in short, everything a great movie can be.

While it may be a very good movie, it's not one you'll watch over and over again.

If the premise of Batman Beyond was originally a gimmick, it has become one that is equally innovative and carefully crafted.

Audience Reviews for Batman Beyond: Return of the Joker

Still, to this day, my favorite Batman animated movie. There's just something perfect about an aging Bruce Wayne played by Conroy and Hamill as a returning Joker. It's also the magic of Bruce Timm's stylization at it's peak of the 90's DC animated era. What's really incredible though, is the script! I mean the whole thing was written from scratch and yet the dialogue, tone and characterizations are just as good if not better than a lot of existing dark/gritty Batman comic book storylines. When Batman Beyond first debuted it was gimmicky, old fans hated the idea of replacing Bruce with a hip, young guy to appeal to a younger audience but over the years it's been finely tuned to become a credible cannon of it's own and this movie is the final hurrah celebrating that. Full of suspense, action, humor in all the right places. I often come back to this movie when I'm in a Batman mood. :]

This animated movie had a gripping dark and inventive story line. The plot of this movie was so clever that i didn't know what to expect throughout the whole film which in my mind is what makes a great film. Having the Joker be the main focus of the film, and having Mark Hamill play him again was a brilliant choice, and as always he does a fantastic job in the role, and the whole story is very well pulled off. But Mark isn't the only great actor in the film, Will Friedle does a great job as his character of Batman Beyond, and Kevin Conroy returns as the aging Bruce Wayne for this film, and both actors do great jobs. Also the animation and music for this film is incredibly well done, and I would say this is one of the best animated films ever made, but its also one of the most underrated, seeing how noone ever brings it up when engaging in a conversation on superhero films or animated superhero films, which is very sad, I just wish it had more recognition like the Dark knight, or at least Batman Returns, but its a classic none the less. If you haven't seen this film do yourself a favor and check it out, it is worth it.

I almost love it as much as Mask of the Phantasm. A great plot and mystery. I've always thought Batman Beyond was one of the best animated series put on t.v., it actually outshines the original series for me. The blend of sci-fi/detective noir was done so nicely. The Joker actually became scary in this and you get to see him do some new tricks, more on the brutal side.

Batman Beyond: Return of the Joker Quotes