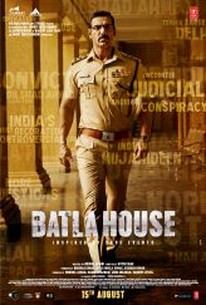 "Batla House" the film is inspired by the Controversial encounter operation which took place in Delhi in 2008, that raised questions across India. Was it a cover-up or a real victory for the Delhi police? Eleven years later, the truth is revealed in the real story behind the "Batla House encounter". Batla House is a true story of a soldier, a police officer, a patriot but most importantly it is the story of a dedicated husband...

The director's unwillingness to question the ethical practices of the Indian police makes "Batla House" a one-sided story.

Batla House feels burdened by its patriotic ambitions and by repetition.

John Abraham is strictly one-note, which may be how dour cops are meant to come off, but it becomes same-same in a screenplay stretched to show off a well-muscled chest.

Since it's a John Abraham actioner, there is more to the film than just the courtroom drama...All-in-all, the film does try to portray how the police is pressured from all sides while dealing with high profile cases.

All said and done, the lead actor delivers, so his fans have no reason not to watch Batla House.

Despite some of the flaws, Batla House makes for a gripping, intense watch.

Sreeparna Sengupta
The Times of India

Batla House is forced to take a stand. And it does, in good conscience. Which is more than can be said about other Hindi movies of whitewashed history.

The film is firmly on the side of the beleaguered cops and it makes its point with the subtlety of a sledgehammer. Which is why Batla House will satisfy John Abraham fans. Those biceps were not made for nuances.

Batla House is a needlessly convoluted and garbled interpretation of the 2008 encounter case which entirely sides with the police.

[It] claims to explore the role played by doubt in a police investigation, but it is loaded with biases.

There's no true tension, largely because of a mediocre supporting cast who are amateurishly theatrical in both their fear and their laughter.

There are no featured reviews for Batla House at this time.