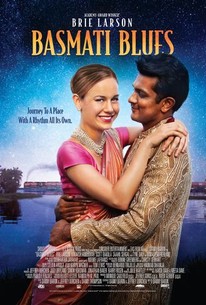 Critics Consensus: Like the genetically modified grain at the center of its story, Basmati Blues is probably best locked in storage and saved for cases of cinematic famine.

Critics Consensus: Like the genetically modified grain at the center of its story, Basmati Blues is probably best locked in storage and saved for cases of cinematic famine.

Critic Consensus: Like the genetically modified grain at the center of its story, Basmati Blues is probably best locked in storage and saved for cases of cinematic famine.

Basmati Blues is a musical comedy that follows Linda Watt (Brie Larson), a sheltered but brilliant young scientist who is plucked out of her company's lab and sent to India by her CEO (Donald Sutherland) to sell "Rice 9," a genetically modified rice she's created - unaware that the rice will destroy the Indian farmers she thinks she's helping. Upon arriving, Linda is overwhelmed and culture-shocked by the barely controlled chaos of India. She is introduced to an ambitious young bureaucrat, William (Saahil Sehgal) who, along with his mother, decides that they are an excellent match. Linda then meets Rajit (Utkarsh Ambudkar), a rebellious college student forced to drop out by lack of funds, who questions Linda's motives. Despite their playful antagonism, or maybe because of it, she starts falling for him. He ultimately opens her eyes to the fact she has unknowingly become part of a destructive plan. Pulsing with the vibrant colors and rhythms of India, Basmati Blues features original songs written for the film by global artists Pearl Jam, Sugarland, Goldspot, Dave Baerwald, and Sonu Nigam.

The Fifty Shades Trilogy Climaxes with a Whimper

Basmati Blues is the kind of easily forgiven early career move that is best released on home video and forgotten.

"Basmati Blues" is one of those movies that isn't terrible but still leaves you wondering why it exists.

Basmati Blues isn't nearly as bad as some of the online buzz might indicate...and that's actually unfortunate. Instead of vying for a so-bad-it's-entertaining categorization, it falls squarely into the hell of cinematic mediocrity.

A broadly played though vibrantly photographed musical romantic-comedy that fails to find a happy medium between cute-and-clever and simply cloying.

Watching it is something like watching a play's first full dress rehearsal or a gangly baby deer's initial efforts to stand, where it's the effort that's more engaging than the achievement itself.

I didn't know whether to be deeply offended or simply sit back and bask in the goofy, tone-deaf glory of Basmati Blues.

I love Brie Larson. I love Donald Sutherland. I love musicals. I quite like rice. I don't like Basmati Blues.

Basmati Blues isn't going to win any Oscars, but I finished the movie happier than when I started.

The movie is not only one of those stereotypical films about India, but also one of those 'white savior comes to rescue Third World village' type of films.

Yes, as an Indian critic, I can confirm that Brie Larson's film is unbelievably and insultingly racist.

But Basmati Blues, even if well-intentioned, does not rise above the cliches to find its heart.

There are no featured audience reviews yet. Click the link below to see what others say about Basmati Blues!