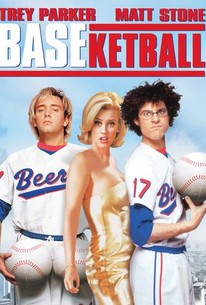 Critics Consensus: Baseketball isn't just a succession of fouls thanks to the comedic zip of David Zucker's direction, but sophomoric gags and a lack of performance hustle by Trey Parker and Matt Stone makes this satire a clumsy bunt.

Critics Consensus: Baseketball isn't just a succession of fouls thanks to the comedic zip of David Zucker's direction, but sophomoric gags and a lack of performance hustle by Trey Parker and Matt Stone makes this satire a clumsy bunt.

Critic Consensus: Baseketball isn't just a succession of fouls thanks to the comedic zip of David Zucker's direction, but sophomoric gags and a lack of performance hustle by Trey Parker and Matt Stone makes this satire a clumsy bunt.

BASEketball tells the tale of three slackers who make up a new, pure and innocent sport in their driveway, only to find it turned into a major corporate and wildly popular professional league.

Bob Costas
as Himself

Al Michaels
as himself

Kareem Abdul-Jabbar
as Himself

Dale Earnhardt Sr.
as Himself

Reggie Jackson
as Himself

Dan Patrick
as Himself

Kenny Mayne
as Himself

Tim McCarver
as Himself

Jim Lampley
as Himself

Victoria Silvstedt
as Herself

I was bored well before the end, but found the first half hour pretty funny.

Jenny McCarthy and Ernest Borgnine -- together at last.

Their incessant, obscene banter is meant to be endearing; their total lack of presence makes it simply annoying.

What kind of movie is it where Yasmine Bleeth is the best thing about it?

The kind of flick that serves itself up as the object of its own satire.

Here's a treat for South Park fans... Better than you might suspect.

You can't help feeling that the whole project must have begun as an off-the-cuff joke which some studio executive took seriously and greenlighted.

Is it dumb? You bet. Is it funny? Sporadically.

With writing like this, can an Academy Award be far behind?

Screw you guys, I'm not going home...until the movie's over, that is.

The creators of South Park trade their voice-over and production abilities for on-screen acting abilities, which makes BASEketball just as hysterical. The films cross-over script will be enjoyable for those who crave sports or comedy, but it's just downright gaudy of a film. 3.5/5

BASEketball is a pretty decent comedy that is pure mindless entertainment. To watch this film, you really need to empty your mind, and enjoy. Starring the creators of South Park, BASEketball is a sports film about a sport combining Baseball and Basketball. The film has some laughs throughout and it relies on crude, vulgar comedy to make the audience. If you're familiar with South Park, then this should be no surprise. This film is funny, but I felt it could have been much better than what it turned out to be. The jokes are offensive, but it manages to make you laugh, but the film did have potential of being something far better. I mean you get David Zucker direct the two guys who created South Park in a film and you're sure to get something very funny. As it stands, the film is worth watching, has some good laughs, but lacks something to really make it stand out. The film works well as a mindless Friday night viewing with friends but if you're looking for a great comedy, pass up on this one. This is a pure mindless comedy that has some crude humor, a so-so plot and decent acting. The film is nothing too special, but is a must see for fans of South Park. I found the film enjoyable, but thought it could have been much better too. As far as comedies go, BASEketball definitely does deliver, but lacks in some areas, and you realize that it could have been a better film. This had the potential of being a great film, but it ends up being a decent film. For what it is, it's an enjoyable, crazy ride that is sure to make you laugh if you're in the right state of mind.

Well it was watchable.