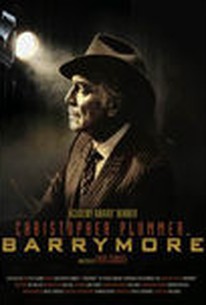 Barrymore, set in 1942, follows acclaimed American actor John Barrymore (Christopher Plummer), a member of one of Hollywood's most well-known multi-generational theatrical dynasties. No longer a leading box office star, the film finds Barrymore reckoning with the ravages of his life of excess. He has rented a grand, old theatre to rehearse for a backer's audition to raise money for a revival of his 1920 Broadway triumph in Richard III. It leads him to look back on the highs and lows of his stunning career and remarkable life. -- (C) The Film Sales Company

Think of it as one great performer saluting another.

Plummer commands the stage as easily and firmly as Barrymore must have. He makes us believe that Barrymore would indeed, as he tries to reach deep into his past and revive Richard, keep recalling his wives or breaking in to sing a pop song of the day.

The interest is in Plummer himself-who he is, what he can do.

You wish you could be seeing this performance live, as it's meant to be seen - but lacking that, "Barrymore" on the big screen provides its own thrills.

Plummer is marvelous, flitting between reminiscence and Shakespearean recitation as a gifted artist aware of his own wretchedness.

Plummer's Barrymore shows flashes of glory as he delivers bits and pieces of various Shakespearean roles.

Plummer is phenomenal, but be warned: you really have to like one-person shows in order to enjoy this 84-minute tour de force.

In spite of creating a CGI world around Plummer, much is lost in this translation, making an impressive performance from him seem inert.

As an acting masterclass, it's educational and entertaining.

Christopher Plummer works hard to give us his idea of John Barrymore in this record of a theatrical tour-de-force, which is more dramatically florid than biographically enlightening.

Director Erik Canuel fails to deliver us from the inevitable hermeticism of the material.

Erik Canuel, who directed and adapted the work, employs a host of cinematic techniques to enhance Plummer's spell-binding turn as a crotchety has-been who, in 1942, attempts to revive his career by playing Richard III.

Once upon a time, there was a great actor named John Barrymore(Christopher Plummer) who while specializing in the classics, also appeared in quite a few early sound films of Hollywood. By 1942, when this one person show was set, he was not the same person, years of alcohol abuse having damaged him beyond repair, ironically leaving him not unlike the character he played in "Dinner at Eight," a washed up actor who thinks he is still relevant. In Barrymore's case, it involves a last chance audition for Richard III. But he cannot even remember the magical words every actor has drilled into him, instead going off on tangents about his famous siblings. None of which is really that interesting or scintillating but the wonderful Christopher Plummer does what he can with such limited material. And that's got to be at least worth a look, right?

I was a little slow off the mark otherwise I would have been in the audience when they filmed Christopher Plummer doing his John Barrymore. Thank goodness HBO decided to pick it up and air it. A great theatrical performance is captured and kudos to Director Erik Canuel who offers appropriate off-stage moments that don't detract from the piece.