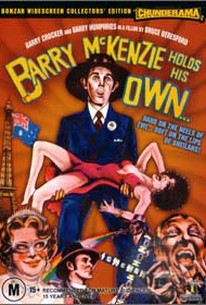 Barry McKenzie Holds His Own Photos

Comedian, actor, and author Barry Humphries wrote and co-stars in this sequel to the surprise international hit The Adventures of Barry McKenzie, based on the comic-strip character created by Humphries. Well-meaning but dunderheaded über-Aussie Barry McKenzie (Barry Crocker) is escorting his aunt, self-proclaimed "housewife superstar" Edna Everage (Barry Humphries), on a trip to France, where they've learned Barry's twin brother, Ken McKenzie, a progressive priest, will be speaking as part of a seminar on "Christ and the Orgasm." En route, a pair of Transylvanian agents, working under the command of the evil Communist vampire Count Plasma (Donald Pleasance), become convinced that Edna is actually Queen Elizabeth II, and not long after arriving in Paris, they kidnap Edna and spirit her away to the count's castle. When Barry learns that his aunt has fallen victim to foul play, he and his mates, including transplanted Australian Colin the Frog (Dick Bentley), set out to find her -- when they're not busy chasing "Shelias," swilling Foster's Lager, or projectile vomiting. In addition to playing Edna Everage, Humphries takes on two other roles in Barry McKenzie Holds His Own, and managed to persuade former Australian Prime Minister Gough Whitlam and his wife to make a cameo appearance in the film. ~ Mark Deming, Rovi

Roy Kinnear
as Bishop of Paris

Critic Reviews for Barry McKenzie Holds His Own

Most of the jokes are either bad or filthy. Sometimes they are both at the same time, and in such an outrageous way that the experience becomes therapeutic.

This is a comedy that employs the crudest of humour. It is a racist, sexist, homophobic, and anti-Catholic travesty that just does not sit well in these politically correct times, and nor should it.

There are no featured reviews for Barry McKenzie Holds His Own at this time.

Barry McKenzie Holds His Own Quotes