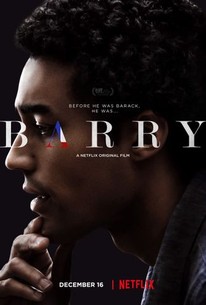 Critics Consensus: Barry opens a speculative window into a future president's formative college years, offering a flawed yet compelling glimpse of American history in the making.

Critics Consensus: Barry opens a speculative window into a future president's formative college years, offering a flawed yet compelling glimpse of American history in the making.

Critic Consensus: Barry opens a speculative window into a future president's formative college years, offering a flawed yet compelling glimpse of American history in the making.

Vikram Gandhi directed this biopic about Barack Obama (Devon Terrell), which focuses on his life as a student at Columbia University in 1981 New York City. There, the future president (then known as Barry) struggles to figure out his identity as he moves between various different communities and social circles. Anya Taylor-Joy, Ashley Judd, Jason Mitchell, and Ellar Coltrane co-star.

Ellar Coltrane
as Will

Barry pays off in the end. It takes its time, but it gets there.

These moments proceed like comic-book panels, each communicating a single point, with little nuance for us to discover.

A sharp, well observed picture, one that's not just one president's story but also a sly examination of how race isn't always the major thing that divides us.

Much as with Southside With You, Barry is buoyed by its tremendous lead performer.

What Barry most captures is an Obama struggling to find his identity and his place in the world, highly attuned to his surroundings.

Biased and showy hero worship is rightfully absent for a solid biography slice.

Don Shanahan
Every Movie Has a Lesson

There is nothing presidential in Devon Terrell's very entertaining portrayal of Barry (and he is only called Barry in this film -- Barack Obama is too grand and complicated a name for this easygoing fellow).

With its emphasis on a sense of place and all the ways a young person can feel out of place, Barry isn't a biopic but, rather, a film about race, class, gender, and general tribalism in America.

The movie goes to great lengths to put you in Barry's head space, so when it's time to cash in on that build up, it works.

There are no featured audience reviews yet. Click the link below to see what others say about Barry!