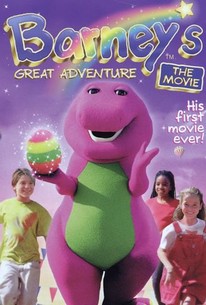 This is the large-screen debut of famous (or infamous, depending on your POV) fuzzy purple dinosaur Barney, the oafish character who began a decade earlier on video (selling 45 million units) and then became a top-ranked public TV preschooler show in 1992, followed by 15 million stuffed toys and 25 million copies of Barney books, plus his own attraction at the Universal theme park. The story in this $15 million movie has Mom and Dad leaving son Cody and daughter Abby, plus Abby's friend Marcella, and a baby with Grandpa and Grandma down on the farm -- where a shooting star deposits a large colorful egg. After it's accidentally taken away, Cody and others chase after the egg, intersecting a Main Street parade and then continuing on through a French restaurant, a circus, and a big hot-air balloon launch, eventually returning to the farm. Music features more than a dozen songs, including "Old MacDonald" and "Twinkle, Twinkle, Little Star". Dances devised by Cirque du Soleil choreographer Debra Brown. Filmed in the countryside near Montreal.

Barney The Dinosaur
View All

With very little modification, this archly innocuous children's musical could have been marketed as a sequel to Invasion of the Body Snatchers.

Although technically superior to the low-rent Barney videos, pic, which was shot in the country near Montreal, still has a bargain-budget look.

This spin-off from the TV series featuring the large purple felt dinosaur of awesome good nature is emetically wholesome.

To those of us on the greying side of five years old, Barney looks like an eggplant and has a rigor-mortis smile, no shoulders, a huge rear end and the sort of nervous giggle that makes you think he has something to hide.

Barney looks both more real and more magical on video; on film, he's clearly a doofus in a felt outfit.

The movie has a flimsy plot, but who cares? Barney, one of the most popular television characters in history, is what viewers want to see, and there's plenty of him.

What is it about that big purple dinosaur?

Although its entertainment value to adults is negligible, it is a safe, harmless bet for families, one parents will neither regret nor fondly remember after it's over.

A movie this cheerful is destined to be awful to audiences over ten years of age...

Those hoping for more than just a long, outdoor version of Barney's TV show, they will likely be disappointed.

It's all rather clumsy and routine.

Really, even three-year-olds deserve better than this.

It's suprisingly entertaining. A must-see for toddlers.