Barbershop 2: Back in Business2004 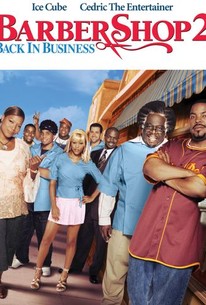 Critics Consensus: The humor is less sharp and more warm-hearted this time around, and the characters are enjoyable to revisit.

Critics Consensus: The humor is less sharp and more warm-hearted this time around, and the characters are enjoyable to revisit.

Critic Consensus: The humor is less sharp and more warm-hearted this time around, and the characters are enjoyable to revisit.

Barbershop 2: Back in Business Photos

Kevin Rodney Sullivan steps in to direct the urban comedy sequel Barbershop 2: Back in Business. The whole gang -- Eddie (Cedric the Entertainer), Jimmy James (Sean Patrick Thomas), Terri (Eve), Isaac (Troy Garity), Ricky (Michael Ealy), and Dinka (Leonard Earl Howze) -- are still there in the same old barbershop in the south side of Chicago. Owner Calvin Palmer (Ice Cube) tries to keep his family business alive in order to pass it on to his own son one day. However, the beloved neighborhood barber shop is threatened by a hair salon franchise called Nappy Cuts. This time around, the old friends are joined by Gina (Queen Latifah) from the beauty shop next door.

Cedric the Entertainer
as Eddie

Ronnel Taylor
as `I' Customer

News & Interviews for Barbershop 2: Back in Business

View All Barbershop 2: Back in Business News

Critic Reviews for Barbershop 2: Back in Business

Provides enough solid, character-based amusement to put customers in the chairs and send them out content with services rendered.

Inane banter soon takes over and is not helped by an unlikely, flashback-heavy subplot about Eddie (Cedric the Entertainer) and a lost love.

This smart, feisty comedy is still ghetto-fabulous enough to make you laugh until your short, back and sides ache.

[A]s funny as the original.

Like going out for a bad meal with a group of people you love being with. You're happy to be in their company; you just wish you didn't leave feeling hungry.

Should have been subtitled Going Through the Motions. This is a pale imitation that never takes off and never really seems to mind.

Manages to throw away everything that made the first film so good.

It's the kind of set-piece ensemble that has proven immensely successful as a sitcom formula but tends to struggle to meet the demands of a movie.

Schoolyard jokes about religious faiths, genetic traits, and sexuality which only work if you enjoy laughing at people because they are darker-skinned, or curlier-haired, or perverted, or have emigrated from another continent.

It ain't high art, but it is a fun flick.

Audience Reviews for Barbershop 2: Back in Business

It may not be as hearty as the first but the film is still good regardless. Barbershop 2: Back in Business brings even more humor and melodrama to keep audiences entertained and happy about their experience. 4/5

Not nearly as good as the first one.

Not as good as the others but this is far better.

A sequel as good as the first. The Barbershop movies are instant classics - and the second installment is just as fast and funny as the first - throwing in Queen Latifah with added good measure. ENJOY!

Barbershop 2: Back in Business Quotes