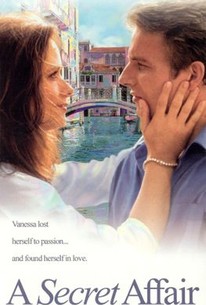 Vanessa Stewart (Janine Turner) has the soul of an artist, but her business tycoon father insists that she follow in his footsteps. As a result, Vanessa convinces herself that she wants to be a globetrotting executive, and also that she truly loves the man to whom she is engaged. But while in Venice on a business trip at the behest of her father, Vanessa meets and falls in love with adventurous Irish TV war correspondent Bill Fitzgerald (Paudge Behan). Deciding to kick over the traces, Vanessa is prepared to turn her back on her family obligations and plight her troth with Bill. But Fate, as it often does, takes a hand in matters when Bill is reported killed during a dangerous combat assignment. Based on a novel by Barbara Taylor Bradford (as if the full title of this made-for-TV feature left any doubt), A Secret Affair first aired October 27, 1999 on CBS.

Eugene O'Brien
as Francis
View All

There are no critic reviews yet for Barbara Taylor Bradford's A Secret Affair. Keep checking Rotten Tomatoes for updates!

There are no featured audience reviews yet. Click the link below to see what others say about Barbara Taylor Bradford's A Secret Affair!