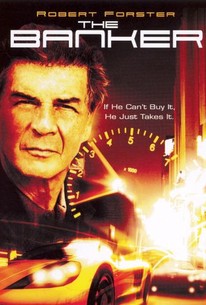 John Garfieldesque leading man Robert Forster plays a cop in The Banker. The title character is above-suspicion financier Duncan Regehr, whom Forster suspects of being a serial killer of prostitutes. Such is the banker's power that Forster is threatened with unemployment, or death, or both if he acts upon his suspicions. The detective is forced to use the "give him enough rope" ploy-and nearly ends up with his own neck in the noose. Old favorites Richard Roundtree, Leif Garrett, Jeff Conaway, and E. J. Peaker dot the supporting cast of this contemporary Jack-the-Ripper chiller.

James Hackett
as Jailer
View All

Critic Reviews for The Banker

It's too slasher film routine to be great, but its central idea is a great one.

There are no featured reviews for The Banker at this time.