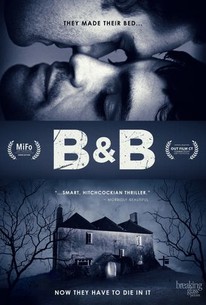 Marc and Fred went to war when they were refused a double bed at a remote Christian guest house. They won their court case and now they're back to claim their conjugal rights. Triumph turns to terror when a Russian neo-Nazi checks in. Their weekend of fun becomes a bloody battle for survival in this smart, brutally funny and dark thriller.

The pic works well within its modest means, wringing life-or-death drama out of, basically, a debate over the accuracy of one man's gaydar.

Ahearne deftly builds the suspense, raising the stakes before steering the story into surprising new directions.

the plot is overly reliant on such technology as smart phones and night goggles, gizmos that eventually hamper the paranoiac suspense.

The film's developments are interesting and it has a few strong, gripping moments that allow the strong drama to come across and gives the cast a chance to prove themselves.

B&B is a clever, socially relevant thriller with a streamlined script that doesn't waste the viewer's time.

Poking fun at some of our most beloved thriller tropes, writer and director Joe Ahearne has crafted a half-satire, half-horror film brimming with suspense, humour and unforgettable plot twists.

a small, claustrophobic film with an excellent ensemble cast and almost perfect pacing. The cinematography is simplistic and deliberately bland and with a subtle scoring which allows the story and performances to be powerfully effective....

Ultimately, there is no doubt in my mind. B&B is a film Alfred Hitchcock would be proud of.

B&B is less action-oriented and more talky than traditional thrillers, but its topical subject matter and good performances make it one to seek out

An edgy, topical thriller with a blackly comical undertone, this offbeat little British film takes some startling twists and turns as its plot unfolds. It's tightly contained.

Rich Cline
Shadows on the Wall
View All Critic Reviews (10)

There are no featured reviews for B&B at this time.