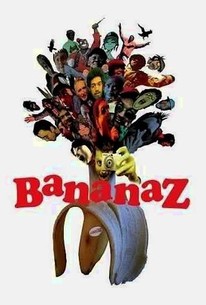 Director Ceri Levy offers music lovers a tantalizing glimpse behind the animated façade of chart-topping super-group The Gorillaz in this music documentary that traces the origins of the band while following them into the recording studio and out on tour. Back in 1998, The Gorillaz were born during a conversation between Blur singer Damian Albarn and his flat-mate, comic illustrator Jamie Hewlett. Conceived as a visual event from the onset, the band consisted of four animated characters - 2-D, Murdoc, Noodle, and Russel - that served as avatars for the real-life musicians behind the scenes. Two albums and several hit singles later, fans are finally offered a glimpse at the mechanics that make this innovate concept band tick thanks to filmmaker Levy - a longtime friend to Albarn who was offered unrestricted access to the band for seven years.

Everything about this film is rough and ready...but fans of Gorillaz will doubtless enjoy its edge.

I had to struggle through this one, and I'm a fan of the music. This will be one for die-hard fans only.

An unusually insightful look into the formation and popularity of animated hip-hop group Gorillaz.