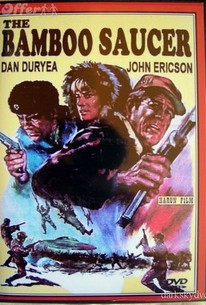 A veteran cast gives the 1968 cheapie The Bamboo Saucer what little credibility it has. In his last role, Dan Duryea plays the head man of an expeditionary force in search of a missing UFO. Since the craft was last sighted in the mountains of Red China, the search takes on political significance. Duryea's American team is eventually forced to align itself with a similarly-purposed group of Soviet researchers (this being a 1968 film, the real bad guys are the Red Chinese). Lois Nettelton has some wonderfully campy moments as a Russian scientist. Bamboo Saucer was produced by Jerry Fairbanks, of "Speaking of Animals" and "Crusader Rabbit" fame. ~ Hal Erickson, Rovi

Andy Romano
as Blanchard
View All

There are no critic reviews yet for Bamboo Saucer. Keep checking Rotten Tomatoes for updates!

There are no featured audience reviews yet. Click the link below to see what others say about Bamboo Saucer!