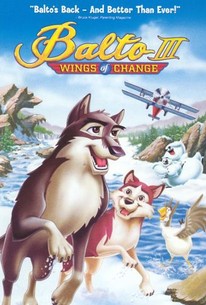 Noble dog Balto returns in this direct-to-video sequel to the popular animated adventure that bears his name. Balto (voice of Maurice LaMarche) has retired from his chores as a sled dog, and his son Kodi (voice of Sean Astin) has taken his place. But Kodi's livelihood may be in danger when mail airplanes come to the frozen North, which threaten to make the post office's dog teams obsolete. In order to determine who can deliver the mail faster, the pilot of the carrier plane challenges the leaders of the dog teams to a race; however, when the mail plane is involved in a serious accident, Balto and Kodi must put aside the rivalry to help save injured pilot Duke (voice of Keith Carradine). Balto III: Winds of Change also features the voice talents of Jean Smart, David Paymer and Kathy Najimy.

Keith Carradine
as Duke
View All

Wings of Change is one of those video efforts that will fade away all too quickly.

Maybe its just that I have a weakness for 90's style animated films or I just love simple movie plotline's but I enjoyed this as much as the previous two. I loved the voice actors despite the fact they've completely changed since the original Balto. I think I heard patrick from spongebob squarepants as a sled dog and donbot from Futurama as a moose! Seems more like a spin off film for the very likable Borris rather than Balto. I say that on a positive note. For straight to video animated movies this is traditionally animated gold.