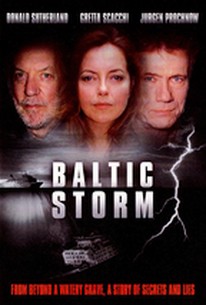 In an era when at-sea disasters have grown increasingly rare thanks to "foolproof" naval technology, the September 28, 1994 wreck of the ferry boat M/S Estonia raised more than a few eyebrows. En route from Talinn to Stockholm, via the Baltic Sea, the craft capsized and 852 civilians never reached their destination. In recounting this tale cinematically, writer-director Reuben Leder (brother of Mimi "Deep Impact" Leder) adapted German reporter Jutta Rabe's conspiracy thriller about the event. The picture - like its source - suggests that classified weapons were being smuggled on board the vessel, and that Russia - after learning of this secret - deliberately torpedoed the craft. The picture recalls Costa-Gavras's Z, Alan Pakula's The Parallax View, and other conspiracy thrillers by unfurling most of its story after the fatalistic event; in the vein of those earlier films, it has a suspicious character (here Jurgen Prochnow, as accident survivor and Swedish attorney Erik Westermark) teaming up with investigative reporter Julia Reuter (Greta Scacchi) to determine the truth behind the inferred political cover-ups. Screen vet Donald Sutherland co-stars. ~ Nathan Southern, Rovi

BALTIC STORM is another movie that proves old adage of history repeating itself first as a tragedy than as a farce.

There are no featured audience reviews yet. Click the link below to see what others say about Baltic Storm!