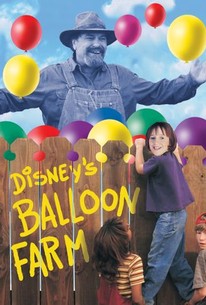 A man proves that hope can grow in the flintiest of soil in this made-for-TV drama for the family. A farming community is struggling to survive a severe drought when a mysterious stranger named Harvey Potter (Rip Torn) arrives in town. Potter rents a farm, a move which is believed to be the height of foolishness by his new neighbors, but one day a local child, Willow (Mara Wilson), passes by Potter's field to discover that it's full of colorful balloons. Willow is convinced that Potter has found a way to grow balloons, and while her mother Casey (Laurie Metcalf) knows better, she sees that Potter has brought an excitement and joy back into the lives of the town's children that had been all but snuffed out by the recent dry spell. Willow thinks that Potter knows some sort of magic, and Casey considers him to be a well-meaning eccentric, but a few of the locals are convinced that he has something dangerous up his sleeve. Disney's Balloon Farm was based on the book Harvey Potter's Balloon Farm by Jerdine Nolen; it premiered on the television anthology series The Wonderful World of Disney.

There are no critic reviews yet for Balloon Farm. Keep checking Rotten Tomatoes for updates!

There are no featured audience reviews yet. Click the link below to see what others say about Balloon Farm!