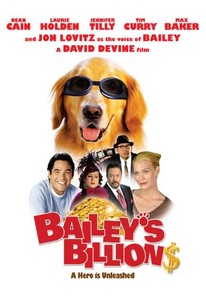 The phrase "it's a dog's life" takes on a whole new meaning in this family-friendly comedy. When eccentric billionaire Constance Pennington passes on, she leaves her entire fortune to her closest companion, Bailey. However, there's something that sets Bailey apart from most of the nuevo riche -- Bailey is a golden retriever dog. Bailey's best human friend is Ted (Dean Cain), a handsome but nerdy animal behaviorist who has learned to communicate with Bailey in "dogish." Ted looks after the wealthy pooch with Bailey's blessings, but Bailey's new fame and wealth don't sit well with everyone -- Caspar Pennington (Tim Curry), Constance's nephew, is infuriated that a dog has inherited his aunt's fortune. With the help of his shrewish wife, Dolores (Jennifer Tilly), Caspar sets up the Animal Rights and Research Foundation (ARRF), and installs Ted on the boards alongside Marge (Laurie Holden), a cute single mother and animal rights activist. But Caspar and Dolores hardly have benevolent aims in mind -- ARRF is supposed to keep Ted and Marge busy while the Penningtons kidnap Bailey and find a way to prove to the world that Ted has been abusing the dog. Jon Lovitz provides the speaking voice of Bailey.

Jon Lovitz
as Bailey
View All

It's an outbreak of the dreaded Talking Animal Syndrome, the most feared of kid-flick contagions.