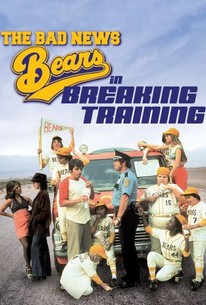 Critic Reviews for The Bad News Bears in Breaking Training

It's pure heart-pulling corn and the audience of grownups as well as children were applauding our hands off.

The new movie suffers the fate of most sequels. We have the feeling that the best was told before and that these are the drippings and leftovers and not as cunningly arranged as the first time around.

The comedic value of kids talking like a bitter pirate with hemorrhoids and smoking [was] played out mid-way through the first film.

A film about the bumbling Little League team who carry on the ancient comic tradition of trying to pass themselves off as winners when they're something else indeed.

Audience Reviews for The Bad News Bears in Breaking Training

This movie changes the cast a bit, and it's not as funny as the first either, I really didn't care for it.