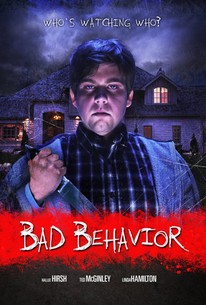 An unsuspecting babysitter fights to protect her two young charges from their psychotic older brother over the course of one harrowing night in this tense independent thriller. At first Zoe thought she had landed a job with the perfect family. But that all changes when she awakens confused and barricaded in the household bathroom with the two youngest children. The older brother is experiencing a psychotic episode, and now their only hope for survival is to remain safely locked up until the parents return home. Later, in desperation, Zoe attempts a daring escape. Only then does she realize that this house is a virtual death trap, and that this outwardly-normal family has a decidedly terrifying dark side.

Jessica Gardner
as Anne
View All

There are no critic reviews yet for Bad Behavior. Keep checking Rotten Tomatoes for updates!