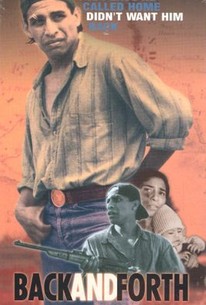 The intense, downbeat drama To and Fro is the feature film debut of Mexican director Salvador Aguirre. Filiberto (Gerardo Taracena) lives in California for three years as a laborer. He returns to Mexico to find his village in shambles, his mother gone, and the water supply controlled by an evil landowner. He escapes with his friend Luis (Ricardo Esquerra), whose house had been burned down. They end up in Mexico City, meeting rampant corruption in their fight to win Luis' land rights. The two friends also fight with each other over the love of Soledad (Tiaré Scanda). Filiberto returns to the village to find an angry mob has assembled to track down Luis.

Critic Reviews for Back and Forth

There are no critic reviews yet for Back and Forth. Keep checking Rotten Tomatoes for updates!

There are no featured reviews for Back and Forth at this time.

Back and Forth Quotes