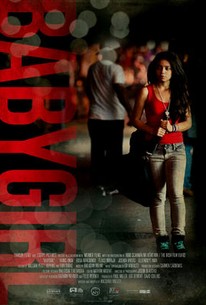 Set in the Bronx, BABYGIRL is about Lena (Yainis Ynoa), a fifteen-year old Nuyorican girl, who has watched her heart-broken single-mom (Rosa Arredondo) fall in love with one man after another. When Victor (Flaco Navaja), the latest boyfriend, starts hitting on Lena, she sets out to expose him. But the plan backfires, and Lena finds herself trapped in an impossible love-triangle. The only way out is for her to stand up and confront some bitter home truths. BABYGIRL is the second feature by Irish director, Macdara Valley, who moved to Bronx, New York seven years ago. (c) Official Site

Millie Tirelli
as Woman in Line

Ivan Salcedo
as Father (The "Claudia" Show)
View All

A gently knowing coming-of-age tale about the dangers of combining intellectual precociousness with emotional immaturity.

You learn everything about the principal characters in the film's opening moments, a tight haiku of inner-city domesticity ...

Despite the filmmakers' good intentions and some agreeable urban atmosphere, this is an unmemorable portrait of a young virgin.

There are no featured audience reviews yet. Click the link below to see what others say about Babygirl!