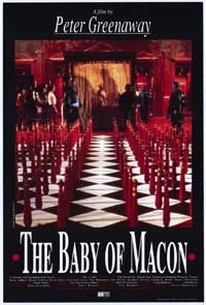 The Baby of Macon is a sumptuous-looking but ultimately shallow tale of manipulation, greed, and religious fanaticism set in Peter Greenaway's favorite, the 17th century. In the city of Macon, an ugly woman suddenly bears a beautiful, healthy baby. Her fellow citizens perceive it as a wonder, with rumors circulating that she could not be the real mother of the child. Her 18-year-old virginal daughter (Julia Ormond) tries to use the situation, claiming that the baby is her own and was born as a result of an immaculate conception. The citizens start to worship the baby and the outraged Roman Catholic Church finally intervenes. Aiming at disclosure of the whole Christian mythology, which, according to Greenaway, always served to manipulate people, The Baby of Macon lacks passion or commitment. Even the much publicized violence, including an unseen multiple rape and the onscreen dismemberment of the baby, seems routine and uninspired rather than shocking. ~ Yuri German, Rovi

Julia Ormond
as The Daughter

Ralph Fiennes
as The Bishop's Son

Philip Stone
as The Bishop

Don Henderson
as The Father Confessor

Jeff Nuttall
as The Major Domo

Critic Reviews for The Baby of Mâcon

I watched it to the end out of a sense of duty, not with pleasure or any hope of edification.

It's unpleasant to view, but is not without many rewards if you can be open-minded and sit through its anti-religious views of the nativity.

Audience Reviews for The Baby of Mâcon

Simple gratitude for Peter after watching this stunningly disturbing medieval drama that exploited the humanity, greed, sacrifice, morality, sex and violence. I have no seen a film that is as beautifully filmed as this one, the cinematography was beyond comprehension. The film is shot in the style of a play within a film, with lots of breaking the fourth wall through out the film. The story is complicated tale of basically the seven deadly sins: Lust, Sloth and Greed of the Daughter, Envy from the Church, Pride of the Son of Bishop, Wrath and Gluttony of the Villagers of Macon. The theme is really dark, but with the complementation of the use of lighting and colour of the costume, it was presented as a macabre satire of religions and the original sin. The script was splendid, every single line was crafted perfectly with so much subtext, and also acted quite superbly. The use of chorus in the film was significant, added a sense of surrealism but with some reference to the Greek tragic theatre. The music was great, created a mixed feeling for the viewers. Off course, the film has some absurd elements as well to shock the audience: The lifeless corpses that seemed out of place, real baby instead of a fake planned one and the slaughter of animals which made the film extremely controversial. The exploration of science and religion was a major conflict in the film, it made the viewers wonder that maybe neither can co-exist in harmony, by the copulation of these two ideas resulted in war and death. It's one of the greatest film that I've seen, but not recommended to everyone as it requires a huge amount of maturity and understanding of the graphic materials in the film.

This is a wild one -- perhaps best described as the document of a "snuff play" being staged in the 1600s? The enclosed play concerns a hideous old woman who gives birth to an improbably beautiful son. The woman's virginal daughter (Julia Ormond) passes off the child as her own, and proclaims him a messiah-like miracle. He is worshipped for a time, but eventually, the people turn against him and his mother. This rather simple story is lavishly obfuscated and complicated with director Peter Greenaway's usual baroque treatment. The sets and costumes are spectacular and, as always, there is plenty of frontal nudity (yup, Ralph Fiennes shows his wee-wee). Three particular scenes are grotesquely violent and bound to turn off many viewers, but if you can get past the first few minutes -- where a naked, twitching, undead lunatic sputters some opening lines so laboriously that you won't even understand all the words -- you'll probably be able to stomach the rest of the film without any real trouble.

The Baby of Mâcon Quotes