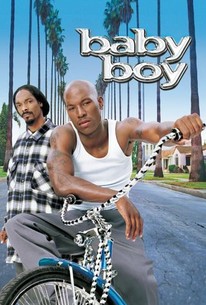 Critics Consensus: Preachy and repetitive in parts, Baby Boy still manages to exude authenticity, thanks to its competent cast.

Critics Consensus: Preachy and repetitive in parts, Baby Boy still manages to exude authenticity, thanks to its competent cast.

Critic Consensus: Preachy and repetitive in parts, Baby Boy still manages to exude authenticity, thanks to its competent cast.

Kareem J. Grimes
as Do Dirty

Alex Wright
as Woman Inside

Johnson and Rhames are superb as Jody's charming, hard-working mother and her ex-con boyfriend Melvin.

I felt myself drawn into a vortex of raw emotion from which I could not escape.

One of the most entertaining African-American comedies of manners ever made.

[Jody's] lessons on growing up and moving on never ring more than halfhearted and false.

What holds the movie together ... is Gibson's broodingly responsive performance.

The film is a bold examination of an aspect of African American life. There's no shortage of sex, violence, or urban realism.

This is yet another coming-of-age tale except that the hero is not a teenager but a young man who goes out of his way to be macho but really is a mama boy.

Recommended mainly to the more devoted Singleton fans, Baby Boy is pretty strong evidence of a filmmaker who still has plenty to say.

An unfortunate hybrid of Oedipal and Peter Pan complexes, Singleton's film is a mishmash of half-cocked ideas and unrealized sentiments.

...while it's not as gritty as Boyz N the Hood or as compelling as Higher Learning, Baby Boy is certainly worth checking out if only for the superb performances...

There's no cuddling this Baby Boy, a profoundly sad commentary on the vicious circle that continues to terminally plague our bewildered, impressionable and disadvantaged young urban black men.

I can't really rate this accurately because I still have no idea if it was supposed to be an accurate depiction or mockery of the ghetto life. I'm going to say that it is because that's the best way to watch it. Saying that, it is by far one of the funniest and perfect satires to ever exist. John Singleton takes the stereotypes of the culture and throws them into the real world, making for a hilarious result. The characters are almost all crazy and devoid of any logic. The story is literally about a man juggling his two baby-momas with his home life. I think this was an odd yet bold move for John Singleton because it questions a lot about the stereotypical thug life.

Though not quite up to the standards of Boyz n the Hood, Baby Boy does take us back to the ghetto, but what Boyz n the Hood set out to define the ghetto life, Baby Boy goes further with an unusual theory... and come around to the point where it teaches young men to learn responsibility. Its a wake up call to the lazy, child-like losers of the world to get out and be a real man and make it on your own. This is probably Tyrese's best performance, he fit the part perfectly. Watch Jody as his life revolve around his excesses and his irresponsibility, with his numerous babies and dealing with their mama's, other women and hustling stolen clothes to earna quick buck with his homie. Things begin to fall apart when his mother brings home a new boyfriend, in the shape of ex-con turned straight Melvin, a giant who tries to keep his cool under Jody's constant criticisms and selfishness. Then after being cauht out numerous times cheating on his current pregnant girlfriend, she dumps him... and dealing with her ex-boyfriend who just got released from gaol and has unfinished business with Jody. Toss in his tired mother, his young son Junior and the numerous other women in his life, Jody needs to learn quick about being a man before he doesn't get the chance and loses everything in his life. Its defintley a John Singleton movie, meaning not another white person in sight. XD Plus its teeming with sexuality to point it does become hilarious but interesting enough... just gotta love it for the entire black style from pimping to hustling and to cursing and insults. A nice flick, nothing really special, just a contemporary look into the life of a young black male in the new millenium.

Singleton has officially lost it.

Baby Boy is as if you got Boyz N Da Hood and decided that it should be more like Tales from the Hood and then throw in some diologue from Soul Plane. A horrible pale version of the masterpiece Boyz N the Hood.