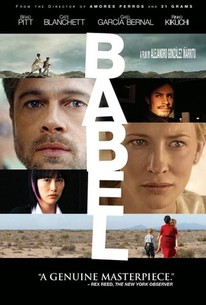 Critics Consensus: In Babel, there are no villains, only victims of fate and circumstance. Director Alejandro Gonzalez Iñarritu weaves four of their woeful stories into this mature and multidimensional film.

Critics Consensus: In Babel, there are no villains, only victims of fate and circumstance. Director Alejandro Gonzalez Iñarritu weaves four of their woeful stories into this mature and multidimensional film.

Critic Consensus: In Babel, there are no villains, only victims of fate and circumstance. Director Alejandro Gonzalez Iñarritu weaves four of their woeful stories into this mature and multidimensional film.

The tragic aftermath of human carelessness travels around the world in this multi-narrative drama from filmmaker Alejandro González Iñárritu. Richard (Brad Pitt) and Susan (Cate Blanchett) are a couple from the United States who have traveled to Morocco in Northern Africa on a vacation after the death of one of their children has sent Susan into a deep depression. Richard and Susan's other two children have been left in the care of Amelia (Adriana Barraza), their housekeeper. Amelia is originally from Mexico, and her oldest son is getting married in Tijuana. Unable to find someone who can watch the kids, or to obtain permission to take the day off, Amelia takes the children with her as she travels across the border for the celebration. Around the same time, in Morocco a poor farmer buys a hunting rifle, and he gives it to his sons to scare off the predatory animals that have been thinning out their goat herd. The boys decide to test the weapon's range by shooting at a bus far away; the shot hits Susan in the shoulder, and soon she's bleeding severely, while police are convinced the attack is the work of terrorists. In Japan, Chieko (Rinko Kikuchi) is a teenage deaf-mute whose mother recently committed suicide. This despairing, confused girl experiences such rage and frustration that she causes her volleyball team to lose a match, and later yanks her underwear off and begins exposing herself to boys in a crowded restaurant. Chieko's father then struggles to reach past the emotional distance which separates him and his daughter. Babel earned Alejandro González Iñárritu the prize for Best Director at the 2006 Cannes Film Festival. ~ Mark Deming, Rovi

Kazuma Yamane
as Kazuma
View All

Alejandro González Iñárritu's latest sprawling, dispersed art-film blockbuster prompts a question: Does he just not know how to tell a story?

Well acted and handsomely photographed, but still extraordinarily overpraised and overblown, a middlebrow piece of near-nonsense: the kind of self-conscious arthouse cinema that is custom-tailored and machine-tooled for the dinner-party demographic.

Babel can be unnecessarily convoluted, ultimately though it's the stark simplicity of the dilemmas faced by each character that hits home, wherever that may be.

If misery is your pornography, Babel is your holy grail.

It's a great film made with style and heart and hope, a cautionary parable and an almost certain Oscar contender.

The experience of watching Babel is undeniably riveting: Even if the film doesn't really lead anywhere, you still can't take your eyes off it.

See Babel while it still illuminates a big screen, for all the clues it contains about our times, as we babble more and more about less and less.

[Iñarritu] has captured humanity in all of its flawed glory - fallen yet beautiful, tragic yet hopeful - all crying out to be heard.

There are moments when a lot is left unsaid. There's a remarkable stillness and delicacy as the music and images interplay and do all the talking.

Babel is a beautifully depressing film about responsibility, redemption, and ultimately that there are consequences to people's actions, regardless of who they are and where they live.

There have been many imitators since, and this is hardly the first in its style - the We-Are-All-Connected-After-All Movie - but I particularly liked Babel because for much of it, Inarritu lets the camera and the soundtrack do the talking. The result is an almost dream-like two-plus hours with countless unforgettable scenes, and even when "nothing" is really happening, you still can't take your eyes off it, Masterful film-making.

High concept, multiple storylines, international cast, and pretty damn good cinematography ... what could go wrong in this heavy handed "message" movie pretty much about the butterfly effect only taken to human perameters? Oh dammit, I've already said it! It never for a second lets go of the idea that they, the fiimmakers, are bringing "truth" to you. Oh really. It does grapple well though with the otherness Americans feel amongst the unwashed foreign contingents.

This is one we have had lying around the house since it came out. (husband bought the DVD but never got around to watching it). Actually got a shock when i put it on and realized the little girl was Elle Fanning, who certainly doesn't look that young these days! (I guess that means we have had this movie for 6 years!). The only reason I bothered now is I recently saw Mammoth, which was unfavorably compared to this. Well this was certainly better. It follows 3 stories which are all linked in some way. All also have some type of tragedy. The Japanese story did not seem to link in as well as the others with only a very slight connection, but I still really liked it. The Morrocan story is good as well, though I have to say it wouldn't be my idea of a relaxing place to go and work on a strained marriage. I did end up feeling sorry for the parents of the two boys, and the other family who got abused over "owning" the gun. Probably the most relatable story was of Amelia the Mexican nanny. I really did feel sorry for her. This is very nicely filmed and cast are all great (though I still can't stand Brad Pitt - one of the things putting me off watching, I think). If I had one complaint, it is that it drags on quite a bit at the end. I think the last half hour could have been trimmed a bit, which would have given all the endings a bit more impact. Overall a good film, but certainly not a feel-good movie, be warned!

Well I started to watch this and at once thought...'oh no what have I done!?, this looks lame', 'I spent how much on this apparent dubbed movie' *weep* It then progressed with the individual stories, each one being a little more intriguing by the minute, until all of a sudden your hooked and really thinking, what's gonna happen here? why? how will it end? how do they connect? The stories are very simple everyday (almost) things that you could relate to (here and there). To be honest I thought it was gonna be boring and I only went because Pitt is a big name and I was enticed by that (the shame), but the movie is really good, really gets you. I wasn't emotionally upset about it but you just wanna see how the story unfolds, it really sucks you in well. The weakest link was the story set in Japan in my opinion, they all link but this section was a little dull compared to the others. I was really surprised with this, not usually my thing but it was good. Pitt was also good and not in an ego trip kinda way, very grounded.