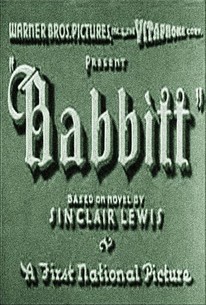 Warner Bros. grabbed up the rights to Babbitt, Sinclair Lewis' satirical novel of middle America, soon after publication in 1922, and it was first filmed in 1924 by Harry Beaumont as a silent (with Willard Lewis, Mary Alden, and Carmel Myers). A decade later William Keighley brought it to the screen with Guy Kibbee in the role of George Babbitt. A small town real estate broker who is too stupid and unimaginative to do anything terribly wrong or dishonest, Babbitt has lived a dull, staid, middle-class life -- until a little bit of recognition from his local loadge and the cajoling of a couple of crooked politicians get him roped into a plot to swindle the city. Suddenly Babbitt's life is poised on a slippery slope, as he falls into an unwise (though basically innocent) flirtation with a young woman (Claire Dodd) during his wife's extended absence. And that quickly leaves him vulnerable to a blackmail effort, and it soon looks as though his whole life may be falling down around him. Fortunately, Mrs. Babbitt (the incomparable Aline MacMahon) can think on her feet, and proves to be made of sterner stuff than her husband in an exciting, twist-laden finale.

...a swell start the film degenerates into an ordinary small-town family picture...

There are no featured reviews for Babbitt at this time.