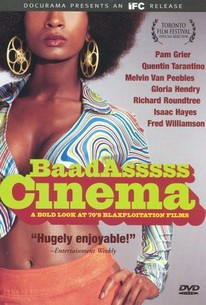 British director Isaac Julien takes on the Blaxploitation era of the '70s in the hour-long documentary Baadasssss Cinema. With archive film clips and interviews, this brief look at a frequently overlooked historical period of filmmaking acts as an introduction rather than a complete record. Features interviews with some of the genre's biggest stars, like Fred Williamson, Pam Grier, and Richard Roundtree. Director Melvin Van Peebles discusses the historical importance of his landmark film Sweet Sweetback's Baad Asssss Song. For a contemporary perspective, the excitable Quentin Tarantino offers his spirited commentary and author/critic bell hooks provides some scholarly social analysis. The music of Blaxploitation movies is rightfully discussed, focusing on Curtis Mayfield's "Superfly" and Isaac Hayes' "Shaft." Also features interviews with writer/director Larry Cohen and film historian Armond White. Baadasssss Cinema was originally shown on the Independent Film Channel in August of 2002 as part of a week-long Blaxploitation film festival.

While certainly not stupendous, the film does provide a nice primer on the history and context for Blaxploitation cinema.

A important and comprehensive study about the blaxploitation cinema from the 70's with the most representative people of this genre. Fresh.

A decent documentary that serves as a pretty good introduction to the genre, despite being unbalanced (lack of much criticism and the negative impact of these films). Had it been lengthier, it would have been better. More criticisms could have been addressed, as well as a more thorough look at these films and their participants. I give the grade extra oints as I am heavily biased towards these films, mainly because I am writing my Master's Thesis over their social and cultural impact.