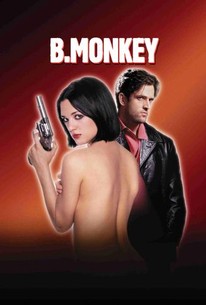 In this witty romantic thriller, Alan (Jared Harris) is a London schoolteacher who leads a quiet, mildly stuffy life. As a hobby, he serves as a jazz disc jockey, spinning tunes for a hospital's public address system, but he craves danger and excitement. One night, Alan stops into a bar for a drink and sees Beatrice (Asia Argento), a beautiful woman who is arguing with two men. Alan is immediately enraptured by Beatrice and begins to pursue her. What Alan doesn't know is that Beatrice is an infamous thief known to the police as "B. Monkey" (named for her ability to break into anything), and the men she was quarreling with were Paul (Rupert Everett) and Bruno (Jonathan Rhys Meyers), a gay couple who are her partners in crime. When Alan becomes aware of Beatrice's secret, he tries to lead her into a safer and more honest way of life, even as she lures him into the thrilling existence he's been dreaming of. Leading lady Asia Argento is the daughter of Italian horror auteur Dario Argento.

Critic Reviews for B. Monkey

Even with all the film's problems, Argento's charisma keeps things relatively interesting for lengthy stretches of time.

This is a terrible film, and often times very boring, droning, and unrealistic...

No one does enough to overcome its formulaic crime story, its lack of gritty authenticity and its squishy inert romance.

Shows stretch marks from the start.

. . . you have the stunning Rhys-Myers to look at. Thick lips and wild eyes have never found a better face to land on.

A cold piece of machinery.

Hands down, it's one of the outstanding films of the year.

Audience Reviews for B. Monkey

While this certainly doesn't satisfy as a thriller, beneath the gritty exterior and all the expletives there lurks a sweet, rather old-fashioned love story. Not a great movie, but quite charming all the same. Rupert Everett stands out as a world-weary drug dealer/addict.