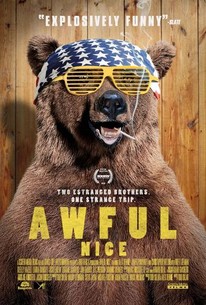 Estranged brothers Jim and Dave must travel to Branson together when their father dies and leaves them the lake home. A series of hilarious mishaps and costly misadventures follow as they attempt to restore the house and rebuild their relationship. (C) Official Facebook

Yakov Smirnoff
as The Man With A Plan
View All

In general, the film feels like all setup and no punch line.

Even when bits go thud, there's a brittle, unsentimental wit about kin's inexplicable tug that's hard to ignore, and the leads - game for some surprisingly sublime bits of physical comedy - eventually wear one's anti-charm defenses down.

The interactions of the two leads are like a finger hitting a single piano note for 90 minutes.

Despite some promise, so much is left unexplained or unpacked and it fails to deliver.

... manages an effective mix of slapstick and sentiment that can't quite sustain itself at feature length.

While this sibling comedy makes some sharp observations about the push and pull of family relationships, it's also one of those deliberately wacky movies that wears us out with nonstop gags that are utterly unconvincing.

Rennie and Pumphrey are both engaging, funny actors, but the relentless aggro-idiocy between them will probably only appeal to other twenty-something dudes who behave like sixth-graders.

Delivers a steady stream of laughs and an accurate depiction of sibling rivalry, contributing to a funny, freewheeling effort that's missing focus, but finds an unusual personality of its own.

Well, they're half right. It's awful.

The main problem with this film is that it pretty much is the same thing from beginning to end. It's Jim and Dave getting into fights over stupid shit, making up, then fighting again. Rinse, repeat. There's something here about the bond between brothers and how, even if one of you is a massive fuck-up, there's still that certain something that draws you to one another. That's fine and all. Of course, it's lost in the midst of all the one-joke approach to the whole film. Though funny at times, it gets really tiring to watch the characters doing the same thing over and over and over again ad nauseam. The highlight of the film would definitely have to be Christopher Meloni. I don't think Meloni gets as much credit as he should for his comedic acting. He's made appearances in the Harold and Kumar films, though his appearances were always overshadowed by Neil Patrick Harris' incredible cameos. But this guy is a great comedic actor and he's easily the best part of the film, in my opinion. The leads are fine, there's a certain chemistry they have with each other, like they could be actual brothers. But, as mentioned, the movie has them do the same thing for 90 minutes. After, about, the third fight between the brothers, the joke definitely overstays its welcome. This just never really got going as a movie to be perfectly honest. It's definitely got the set-up of a movie, but it doesn't play out like one. It feels unfinished. Like the script wasn't revised, and improved upon, before actually filming it. It's ok though, it's not any good, but I have seen much worse. It's just a lazy film. Only watch if you've watched absolutely everything else that Netflix, or any other streaming website that has this movie, has to offer.