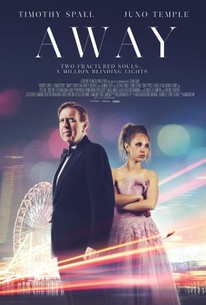 Ria and Joseph are kindred spirits, both looking for a way out. Ria wants out of this town and is trying to scrape enough money together to get her and her friend, Kaz, away to the coast. While Joseph wants out of this life as he struggles to come to terms with the death of his wife - he just wants the pain to end. With no parents in the picture, Ria has become a surrogate mum to her friend. And although she shoulders the responsibility willingly, she's young herself and has moments where she longs for escape from the daily grind - something she does through her music and her imagination. With no kids or responsibilities, Joseph has decided to head to Blackpool to commit suicide - it seems fitting, symbolic somehow, as it's the place he and his wife spent the most time, competing in dancing competitions at the tower ballroom. But fate's about to step in and bring these two lost souls together. When Ria's abusive ex-boyfriend Dex sets his sights on Kaz, Ria takes drastic action to get the money together that the need to escape. However, her actions have serious reprocutions and it's when she's at the mercy of Dex - when all hope seems to have evaporated - that Joseph steps into her life. Desperate and vulnerable, Ria misinterprets Joseph's intervention as heroic - not as the suicidal act of a man with a serious death wish. Seeing Joseph as her knight in shining armour, Ria tags along with him to Blackpool - something Joseph views as more than a minor inconvenience. But as they spend time in each other's company, an unlikely friendship starts to blossom as both start to see in the other something that's been missing from their lives. Ria starts to get a sense of what it might have been like to have a father figure and, for the first time in a long time, Joseph starts to get a sense of optimism. This is a story of love, of loss and of hope played out against the magical backdrop of Blackpool.

Critic Reviews for Away

Away is small film which has a lot going for it. Set in a wintery Blackpool, David Blair's drama focuses on the friendship between widower Joseph (Timothy Spall) and Juno Temple's Rita, a prostitute on the run from her violent pimp (Matt Ryan).

The amount of clichés and melodrama here make the nearly two hour run time feel like an eternity.

So grim and downbeat that it may just be too bleak for some viewers.

Away offers its audience a highly ambitious story revolving around themes of loss, guilt and redemption.

It's a well-meaning, often superbly acted film with nothing very original to say.

Audience Reviews for Away

There are no featured audience reviews yet. Click the link below to see what others say about Away!