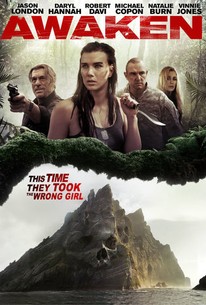 In this heart-pounding thriller, a Russian Special Forces soldier must escape from a mysterious island where people are harvested for their organs and continue on her quest to rescue her sister.

Adrienne McQueen
as Nurse
View All

There are no critic reviews yet for Awaken. Keep checking Rotten Tomatoes for updates!

For a small, independent, real-life horror film, Awaken has a lot of pieces to it's story, there really is a lot going on, in what initially seemed like a cut and dry story. If this film had been done a bit differently, and if it's impressive cast had been used for more than simple cameos, this may have been a much better film. The story begins with Billie (Natalie Burn) waking up on an island, being chased by strangers, and rescued by another group of strangers. She comes to learn that everyone in her group of rescuers woke up as she did, and appear to be hunted for sport. Billie wants to escape to one of the nearby cluster of islands, but learns that attempts have been made, and no one has ever come back, but Billie is a military brat and refuses to accept that. The story here is very well written, especially for this type of film, but everything is so anti-climatic. Just about every scene turns into a fight scene or a shoot out and there is nothing original about that. Honestly, what is the point of having this great story idea if ever scene is going to end up the same way? There is also the fact that the casting is a complete mystery. This film managed to get Darryl Hannah, Edward Furlong, David Keith, and Robert Davi and they simply make cameo appearances in ancillary roles? If that's the case, why even waste the money to bring them in? Awaken had the story, it had the cast, it had the looks, it even had a premium location, but poor dialogue, predictable outcomes, a misused cast, and a painfully horrendous ending absolutely destroyed what could have otherwise been a rather entertaining film.