Awake: The Life Of Yogananda2014 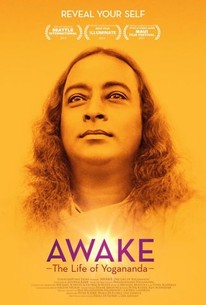 Awake: The Life Of Yogananda Photos

AWAKE: The Life of Yogananda is an unconventional biography about an Indian Swami who brought yoga and meditation to the West in the 1920s. This feature documentary explores the life and teachings of Paramahansa Yogananda, who authored the spiritual classic Autobiography of a Yogi, which has sold millions of copies worldwide and is a go-to book for seekers, philosophers and yoga enthusiasts today. It was the only book that Steve Jobs had on his iPad, and he arranged to give away 800 copies of it to the dignitaries who attended his memorial service. It was also a point of entry into Eastern mysticism for George Harrison, Russell Simmons and countless yogis. By personalizing his own quest for enlightenment and sharing his struggles along the path, Yogananda made ancient teachings accessible to a modern audience, attracting many followers and ultimately helping millions of seekers today to turn their attention inwards, bucking the temptations of the material world in pursuit of self-realization. (C) PMK BNC

Critic Reviews for Awake: The Life Of Yogananda

After a while, all this serenity becomes soporific. It's one for the already enlightened.

A voice-over narrator supplies some of Yogananda's more inspired passages, but the affected tone makes it all sound rather silly.

Those looking for further enlightenment might want to pass on the feel-good cinematic hagiography known as "Awake: The Life of Yogananda."

It's not quite hagiography, but it's almost hard not to get caught up in the film's admiring tone.

Unfortunately, while the swami taught his disciples to explore the depths of their very souls, the film barely scratches the surface of his life and teachings.

Yogananda's story is a fascinating one. And although the documentary will likely attract a discrete group, it has the potential for broader appeal.

A rounded portrait of the Father of Yoga in the West that celebrates his practical and uplifting art of spiritual living.

Fittingly enlightening, "Awake: The Life of Yogananda" is a vivid, elegantly assembled portrait of the savvy guru with the cherubic face and penetrating gaze who brought meditation to the West.

A film that works both for followers and for those interested in knowing what yoga is truly about. Hint: It's not about six-pack abs.

The film's storytelling is straightforward, almost standard-issue, but the story itself is compelling, as is the testimony of devotees.

Audience Reviews for Awake: The Life Of Yogananda

There are no featured audience reviews yet. Click the link below to see what others say about Awake: The Life Of Yogananda!

Awake: The Life Of Yogananda Quotes