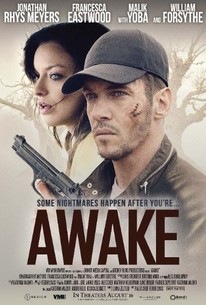 On a quiet evening, a shabby beige sedan speeds down a country highway. Dust and gravel fly through the air when suddenly the car slides out of control into a ravine. Later a man wakes up in a hospital bed with no recollection of who he is or how he got there. His nurse Diana (Francesca Eastwood) is unable to find any identification and refers to him as John Doe (Jonathan Rhys Meyers). The police barge into the hospital, accusing John of being a serial killer responsible for the murder of several young women in the area. As the Sergeant ushers John into a private room for questioning, he manages to escape with the help of Diana, who is convinced of his innocence. The fugitives then set off for the last crime scene in search of clues and answers to clear John's name but the benevolent nurse will soon uncover the shocking truth behind the amnesiac's identity and the web of deceit that will lead him to a final fight for his survival.

This is a neo-noir that never generates any spark.

A thriller that promises to start quickly and find a fresh twist or two by the end, and fails at both.

Just an average suspense movie but if you are a Jonathan Rhys Meyers and Francesca Eastwood fan like me it is worth watching.

"Ultimately, [Awake] is a throwback to the crime thrillers of the 1990s and early 2000s, which isn't a bad thing but it hardly feels new. But while the story is simple, Malik and Meyer's acting is superb."

Kate Sánchez
But Why Tho? A Geek Community

... squanders a potentially intriguing concept with a series of far-fetched twists that fail to withstand the slightest logical scrutiny.

A would-be thriller so convoluted that it takes nearly a third of its running-time for answers to be laboriously doled out at the end.

Awake (2019) releases its grip very early in the narrative.

There are no featured reviews for Awake at this time.