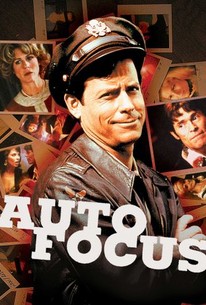 Based on true story, a glimpse into the colorful life, and mysterious death, of actor Bob Crane. Handsome and charming, Crane became well known as the star of CBS' hit comedy "Hogan's Heroes" (1965-1971). Capitalizing on his fame, Crane dove into the freewheeling spirit of the times with relish, having affairs with numerous women. Crane fell into the seamy world of sex, strip clubs, and decadence. Eventually, Crane teamed up with video technician John Carpenter to document his exploits, an association that may very well have led to his murder in a Scottsdale, Arizona motel room in 1978 where his skull crushed with a camera tripod.

The movie's themes are aptly captured in the double entendre of the title, suggesting both Crane's narcissism and the video technology that abets it...a lot of Auto Focus is coolly funny--it's a slyly satiric comedy of '60s manners.

Another probing case history of male pathology from one of the most consistently interesting American film-makers alive.

Kinnear delivers an excellent performance and the delirious imagery lingers for months.

Schrader really isn't interested in Crane except as the straw man for his moral lessons about sin and sexuality and the nature of celebrity.

How do you make a movie with depth about a man who lacked any? On the evidence before us, the answer is clear: Not easily and, in the end, not well enough.

For all its tantalizing forays into the narcotic, head-swimming loss of self and perspective in addiction, Auto Focus never quite extends its sympathy to its characters or convinces us that they are real people.

What makes the material work so well here is the perception that both writer and director choose to execute with its protagonist, which is not to provide overlying sympathy for him or his choices.

Ultimately one-dimensional and superficial look into the life of Bob Crane...

A repetitive and disappointingly shallow look at what is in fact an intriguing Hollywood mystery.

Watchable, but not recommendable.

Extremely dark but with good acting.

Willem Dafoe is my GOD.

Apparently there is a downside to pornography. Who knew?!?!