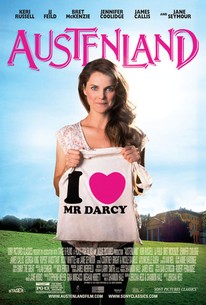 Critics Consensus: Despite an intriguing premise and fine performances from a talented cast, Austenland succumbs to outworn romcom cliches and slapstick gags.

Critics Consensus: Despite an intriguing premise and fine performances from a talented cast, Austenland succumbs to outworn romcom cliches and slapstick gags.

Critic Consensus: Despite an intriguing premise and fine performances from a talented cast, Austenland succumbs to outworn romcom cliches and slapstick gags.

Twilight author Stephanie Meyer makes her first foray into film producing with this romantic comedy about a 30-something woman whose lifelong obsession with all things Jane Austen lead her to an eccentric theme park based on the author's writings, and into the company of a handsome young suitor. For as long as she can remember, Jane Hayes (Keri Russell) has treasured the writings of the author behind such literary classics as Emma, and Pride & Prejudice. For years, Jane had been stashing away funds in hopes that someday she would be able to afford a trip to Austenland - a place where the die-hard fan can be completely immersed in the elegant world of the beloved author. When Jane finally manages to save up enough, she excitedly packs her bags and books a room. Upon arriving, Jane quickly discovers that Austenland is everything she had ever imagined. Every detail is exquisite, save for one small exception: Jane's limited funds mean that she can't enjoy the same luxury experience as the other, wealthier bachelorettes who currently populate Austenland, but she decides to make the most of her trip regardless. Later, when Jane falls into a romance with a dashing young servant, a lifetime of dreams suddenly begin to come true. Jane Seymour, James Callis, and Jennifer Coolidge co-star. ~ Jason Buchanan, Rovi

Ayda Field
as Molly
View All

Simply by smiling, [Russell] robs one of the will to live.

So actively inept and so horribly precarious that it becomes curiously engrossing, like watching a monkey spin some plates or a blindfolded dog attempting to ride a unicycle.

For a while, the film gets by on silliness alone. But in the end, it all amounts to no more than a sniggery guilty pleasure.

The acting throughout falls into two registers; pantomime mugging for most of the cast, while the romantic leads, Russell and Feild, look so ill at ease that you pity them.

Austenland is modest fun but needs to show it has a brain under its sun bonnet.

"Austenland" understands Austen's enduring romantic appeal but has no use for her deeper themes of class, wealth and gender inequality.

If Austenland is supposed to criticize obsessive fandom, the ending makes no sense. If it isn't, the rest of the film makes no sense. And yet, the light, airy, innocent nature of it all is somehow pleasing enough

Instead of exploring some of the subtext of what's really going on here though, Hess rides the film into broad romantic territory.

Hess' bread and butter shines through; the silly, elastic facial expressions, the shameless pratfalls, witty exchanges, and Coolidge's golden one-liners kept me laughing all the way through and saved the experience from being a regrettable one.

This is unarguably literature-lite, and more likely to comes across as a patronising approach to the life's work of one of Britain's finest exports than a well-intentioned send-up.

The film is light and fun and amusing. In fact, my biggest criticism is that the movie doesn't take the story seriously enough.

Any nerdy girl worth her salt has sat at home on a Friday night and watched an Austen marathon on the couch, dreaming about their Colonel Brandon or Mr. Darcy. (Not that I know this from experience, mind you.) In this Keri Russell vehicle she plays Jane, an obsessed Austen fan who wants some romance in her life, instead of the slew of guys she's previously dated. In true Austenian fashion, Jane travels halfway across the world to stay at an exclusive manor in England, where she lives the life of an Austen heroine (most likely Fanny Price). Read more at http://www.bluefairyblog.com/reviews/2015/8/21/austenland

This film is a lot of fun for the inner geek/romantic. Russell doesn't quite gel for as a character smitten with Jane Austin and Coolidge, while funny, is a bit too forced and frequent to sit right. JJ Feild is marvelous for his role. The plot doesn't quite make sense, but it's all good fun and thoroughly enjoyable.

This one was a peculiar film. I sort of liked the premise but then most of the film was actually ridiculous. Even Keri Russell rolls her eyes several times. But the problem was it was so absurd that it actually made me laugh out loud. So I'm not at all sure if I was just laughing at a really bad film. You have been warned.