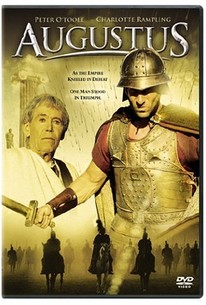 The life and times of Augustus Caesar are brought to the screen in this made-for-television historical epic. After assisting Julius Caesar in a string of military campaigns, Augustus is adopted by the Roman leader, and when Brutus and Cassius kill Julius, Augustus joins forces with Marc Antony to rid them and their associates of the Roman leadership. As Augustus becomes Rome's new and uncontested leader, he falls for the beautiful Livia and is forced to turn against Marc Antony on the field of battle. While Rome enjoys a period of wealth and progress, Livia becomes politically ambitious and Augustus finds he has become the center of an assassination plot. Augustus stars Peter O'Toole and Charlotte Rampling, who respectively portray the mature Augustus and Livia. ~ Mark Deming, Rovi

O'Toole is the one who really carries the film, an old veteran delivering on a part that, in retrospect, seems as if it couldn't have been played by another.

The political machinations and intrigues rampant during Roman times continue to fascinate me. With the exception of Charlotte Rampling, the film itself is mediocre. This depiction cries for further exploration of this fascinating time period.