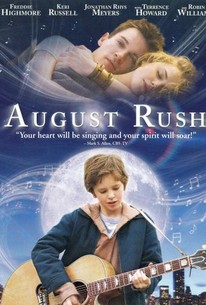 An infant secretly given away by Lyla's father has grown into an unusually gifted child who hears music all around him and can turn the rustling of wind through a wheat field into a beautiful symphony with himself at its center, the composer and conductor. He holds an unwavering belief that his parents are alive and want him as much as he wants them. Determined to search for them, he makes his way to New York City. There, lost and alone, he is beckoned by the guitar music of a street kid playing for change and follows him back to a makeshift shelter in the abandoned Fillmore East Theater, where dozens of children like him live under the protection of the enigmatic Wizard. He picks up a guitar for the first time and unleashes an impromptu performance in his own unique style. Wizard names him August Rush, introduces him to the soul-stirring power of music and begins to draw out his extraordinary talent. Wizard has big plans for the young prodigy but, for August, his music has a more important purpose. He believes that if his parents can hear his music, they will find him. Unbeknownst to August, they have already begun that journey.

Marian Seldes
as The Dean

Dietrice A. Bolden
as Gospel Singer

A music box trying to pass itself off as an orchestra.

However predictable, a good ol' fashioned happy ending is always welcome. But bring a box of tissues: A good cry is to be expected as well.

Even the final few moments, which should have us choking up, seemed hurried and shot from the wrong angles.

Watching this yucky emotional drama is like being sprayed with treacle from a high-pressure hose.

A show-stopping compendium of clichés, bogus emotions, duff dialogue and cringeworthy performances. Yet it's so naively idiotic that it's hard to hate. Better just to ignore it.

Yes, August Rush is cheesy, almost embarrassingly so, but it's also irrepressibly sweet.

Lay(s) on the saccharine schmaltz in broad, simplistic layers.

A story that could steal the hearts of millions but fails in the attempt... [Full review in Spanish]

Essentially an extended music video, and with about as much narrative weight, August Rush is empty, flat, and pointless.

A heartwarming fairy-tale that is undeniably sweet, even if it occasionally crosses over into sappiness.

"The only thing astounding about this movie is how bad it is."

Someone in Hollywood must have it in for Thanksgiving. How else to explain the cruelly timed release of August Rush, a wretched confection that only the most determined will be able to count among their blessings?

A good hearted film with some great music, great performances, but a very terrible ending that almost ruined it for me.

Now, okay. I understand that this is a film that loves music (and I can see that), but, one problem I have with some films is the crime they commit of taking a plot that has been used over and over again and just rehashes it without adding anything new. Sadly, for August Rush, this is the truth. The acting in this film is, actually wonderful. Freddie Highmore is wonderful as ever, but even his acting can not really save this film. The script is basically a modern telling of Oliver Twist, just added a love of music. Now, if the script only worked on the love of music and cut the rest of it out, then this film would have been better. But, it had to have a sappy love story thrown in. Now, the main reason, if any, to see this film would have to be the film's score. I mean, it is just wonderful to hear all the music in the film and it would have worked well if the film only dealt with Evan (Freddie Highmore) being a music prodigy. Now, the direction of this film is rather slow. I mean, it could have been much faster paced and it does drag for a while. Overall, I only recommend this film if you are into cliche films or just really good film scores.

August Rush is the story of a musically-talented boy who was abandoned at birth by his mother. The film follows his search to find his birth parents.oh i totally loved this movie and who wouldnt love Freddy Highmore!!!!!!!!!!