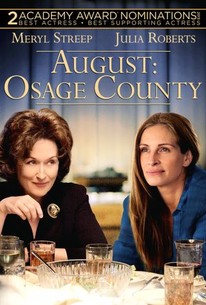 Critics Consensus: The sheer amount of acting going on in August: Osage County threatens to overwhelm, but when the actors involved are as talented as Meryl Streep and Julia Roberts, it's difficult to complain.

Critics Consensus: The sheer amount of acting going on in August: Osage County threatens to overwhelm, but when the actors involved are as talented as Meryl Streep and Julia Roberts, it's difficult to complain.

Critic Consensus: The sheer amount of acting going on in August: Osage County threatens to overwhelm, but when the actors involved are as talented as Meryl Streep and Julia Roberts, it's difficult to complain.

AUGUST: OSAGE COUNTY tells the dark, hilarious and deeply touching story of the strong-willed women of the Weston family, whose lives have diverged until a family crisis brings them back to the Midwest house they grew up in, and to the dysfunctional woman who raised them. Letts' play made its Broadway debut in December 2007 after premiering at Chicago's legendary Steppenwolf Theatre earlier that year. It continued with a successful international run. (c) Weinstein

This is a movie about crummy mummies in which everyone looks their age. That will strike many as a downer but I was left wanting more.

The movie version of Tracy Letts's award-winning Broadway stage play looks classy, but doesn't add up to anything very nourishing.

This star-studded shout-off generates none of the heat and intensity of Tracy Letts' stage play.

A sometimes wickedly funny but ultimately sour, loud, draining tale of one of the most dysfunctional families in modern American drama.

This star-studded loopy melodrama is brash, foul-mouthed, self-consciously offensive, intermittently insightful and has a gaping hole where its heart should be.

With long monologue-like passages and extended scenes set in one particular spot of the house between two or three characters at a time, the movie has a hard time escaping its stage play origins.

Directed by John Wells and written by Tracy Letts based on his play of the same name, August: Osage County is a tour de force in acting on all counts.

Several cast members are in fine form, but most of them have the potential to distract rather than homogenize, and thus, Wells seems to have let everyone do what they do best and the result feels like a competition of skill.

This story of a family meltdown offers the richest payload of powerhouse female performances we're likely to see all year.

Pleasant, it is not.

Meryl Streep stands out in a fantastic cast portraying a pretty dysfunctional family. Between moments of great tension and vileness between the members there are also very touching scenes. The plot has little function than to push those characters into the same room, from there on out it's a pleasure, albeit sometimes painful, to see them rub against each other. The well written interactions remain pretty memorable even days later.

It's all fine until the deep dark secrets (so to speak) begin to come out. If only they were convincing enough. The tragedies keep on mounting, but it's hardly effective as I couldn't care enough for any of the characters. May have been better if they'd cared to execute the plot in a way that the twists and shocks felt genuine. Yet, for what it is, a single viewing shouldn't be fatal. In fact, I found it to be a relatively better means of time pass (apparently, for that once). 2.25 out of 5.

A quiet tragedy with a great cast. Why wasn't this one nominated for an Oscar? You must see this to see how good Meryl Streep is in it.

This is probably one of the first times that I truly noticed what happens to a film when you have a director who truly can't keep up with his cast. "August: Osage County" has a cast that is to die for - and they don't disappoint. But when the film itself is directed in a generic, uninteresting, unfocused fashion, it sometimes leaves the actors with too much responsibility to shoulder to make the material work. "August: Osage County" is better when it sticks to its theater roots and stages scenes statically. An electric scene at the dinner table or intimate exchanges between sisters or mothers and daughters work better than the film's earlier expository scenes where the film attempts to take advantage of its cinematic scope and stage scenes in exteriors or in mobile locations. This gives the first half of the film a very messy feel and makes certain characters feel unrealized. This is especially true with Meryl Streep's characterization of matriarch Violet Weston. Her first scene is an actor's showcase - she's druggy, sickly and irrational. She chews the scenery with abandon leaving the restrained Sam Shepard and understated Misty Upham looking like lost spectators. Streep seems to be experimenting at the beginning of the film with what type of character she wants Violet to be. Is she crazy or is it really the drugs? Is she truly mean-spirited or just a victim of a cruel world? It's during that climactic dinner scene where Streep seems to get a firm hold on the character and for the rest of the film is magnificent and fully realized. But if there's a standout among this talented group, it is surprisingly Julia Roberts who is amazing as eldest daughter Barbara Weston. Roberts lands her zingers better than most of the other cast members and also has her best moments with her facial reactions to her family's actions. The rest of the cast is good as well, but the material doesn't give them much time to fully bring their characters full circle. Margo Martindale and Chris Cooper come closest but they are given more room to breathe, to introduce their characters and to make an impact. The rest of the cast arrives on scene, get dropped in the plot and are expected to make something stick. This is especially apparent with Benedict Cumberbatch who arrives as a crazy mess, yet you don't know if he is mentally unstable or, as the film seems to imply later, a victim of a verbally abusive mother. Overall, "August: Osage County" is a film is only half effective. A large, talented cast thrown together in a house, given a Pulitzer-Prize winning theater script and told to ACT. They do that. But the result is a story that doesn't feel fully realized until halfway through. And that is the true definition of a wasted opportunity.