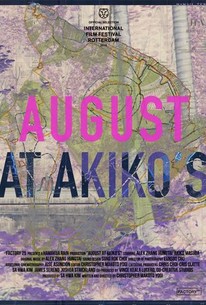 Armed with just his suitcase and a sax, cosmopolitan musician Alex Zhang Hungtai (from the band Dirty Beaches) returns home to the Big Island of Hawaii having been away for nearly a decade. Hungtai, playing a fictional version of himself, takes refuge in a Buddhist B&B with a woman named Akiko (Akiko Matsuda, playing herself). Alex's experimental free jazz music at first collides with the bell sounds ofAkiko's meditation, but as the film evolves and a friendship develops, the two harmonize.

Critic Reviews for August at Akiko's

Yet another bold proof of the first-shot principle, the notion that many great films can be recognized as such from their opening images.

It's not heavy-imprint filmmaking, but its breezy, benevolent warmth stays with you after its immediate details begin to fade.

The gestures accumulate; cohere, into the incidental and essential anthropology of not regional, not local, but wholly personal picture-taking and moviemaking. (And sound-smithing.) And also: how little is just enough?

There are no featured reviews for August at Akiko's at this time.