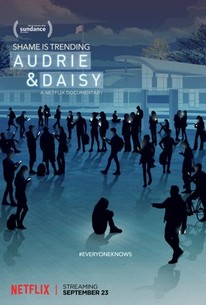 Audrie & Daisy is an urgent real-life drama that examines the ripple effects on families, friends, schools and communities when two underage young women find that sexual crimes against them have been caught on camera. From acclaimed filmmakers Bonni Cohen and Jon Shenk (The Island President, The Rape of Europa), Audrie & Daisy--which made its world premiere at the 2016 Sundance Film Festival--takes a hard look at America's teenagers who are coming of age in this new world of social media bullying, spun wildly out of control.

There's more than enough story to tell here, maybe too much for just one film, no matter how well-meaning it may be.

Audrie & Daisy is a stark portrait of a problem which is not in any way local, aberrant, or random. The problem is systemic.

What the documentary does well ... is critique a culture that allows young men to disregard other people's humanity.

The movie is a sobering look at the minefield teenage girls traverse when it comes to drinking, pressure from porn-addled boys and social media popularity.

This documentary may indeed stir outrage and encourage victims to report such crimes. But it's still a song we've heard before.

This isn't just a doc that should be shown in schools, it should be required viewing for anyone with a pulse who lives in the 21st Century.

Cohen and Shenk refuse to allow the audience to sit in ignorance, not only revealing the horrid heart of a backwards societal view of rape but allowing that idiocy to speak for itself.

Audrie & Daisy is ultimately an extremely affecting film that does a better job of examining rape culture than Kirby Dick's The Hunting Ground from last year.

The documentary scrutinizes the "blame the victim" mentality that has seemingly gotten worse in the internet era. But the film also offers a redemptive message of compassion via a network of survivors.

This is a compelling story, told with tenderness and sensitivity.

A documentary about miscarriages of justice in an undeniable culture of rape, that will infuriate and move in equal measure. It's the kind of film that should be shown in schools as part of social studies. It's also an angry cry, a call to action, a work of solidarity. It demands to be seen.

It should be watched back to back as a companion piece to The Hunting Ground about this revolting type of crime that goes unpunished because there are people who blame rape victims for what happens to them - like that despicable sheriff who is proof of this ugly rape culture.